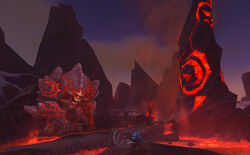 Ancient creatures of molten stone, the magnaron are directly descended from the colossals who first shaped Draenor. There are few living today who can communicate with these enigmatic giants, and fewer still who understand their seemingly chaotic motivations. Among the roiling lava spouts of Frostfire Ridge, the magnaron carve fiery sigils into the earth and shape entire mountains to their needs. Magnaron have been known to both enslave and befriend elemental furies, and they are seldom alone. Approach with caution!