Lord of Ironforge, King of Khaz Modan, King under the Mountain, Grand Explorer, The Speaker

Magni Bronzebeard was the King of the dwarven kingdom of Khaz Modan, head of the Bronzebeard Clan, and head of the Senate of Ironforge.[citation needed] During the Second War he defended Ironforge from the orcs and joined the Alliance. He was a founding member of the Explorers' League, led by his brother Brann, and forged the Ashbringer hoping it would avenge his brother Muradin, who was believed to have been killed by the Scourge. Magni passed leadership of the dwarven people to the Council of Three Hammers, acting on the warnings of Azeroth to become her servant and warn the Alliance and Horde about the impending invasion of the Burning Legion[2].

With the Burning Legion and Sargeras defeated, Magni turned his attention to the wound suffered at Sargeras' hand, the massive sword plunged into Silithus. Knowing azerite was the lifeblood of Azeroth, he sought out adventurers to stem the flow. Once accomplished, he tried to dissuade the factions from fighting against one another.

The eldest of the three Bronzebeard brothers, Magni was destined to be the king under the mountain. Strong of arm and keen of mind, Magni loved his two brothers above all else in the world. From the time of his youth, Magni the prince was keenly aware of what would be expected of him in the future. This apparently intimidated him and he questioned if he could be the kind of leader Ironforge needed. He even privately wished that his father and brothers would outlive him, and thus their people would have a good king.[3]

He was one of the heroes during the Second War, often directly leading his people into battle.[4] King Magni led the defense of his capital during the siege of Ironforge. Upon the liberation of Ironforge by the forces of the Alliance of Lordaeron, he pledged his kingdom's support, his two brothers accompanying the Alliance host.

During the fall of the Kingdom of Lordaeron, his middle brother, Muradin, was reportedly slain in Northrend. Prince Arthas Menethil sent a letter to Magni stating that Muradin was slain by undead, but thanks to his sacrifice, Arthas was able to obtain Frostmourne and would be returning to Lordaeron. The letter also indicated that Muradin's body would be returned, though this never happened.[5] Eventually, Magni learned the truth: that Arthas himself was responsible for Muradin's death.[6] Magni was overcome with grief at the news of Muradin's demise, but he and the youngest brother, Brann, remained steadfast in their desire to continue serving the dwarven people.

Creation of the Ashbringer

After Muradin's apparent death, High Inquisitor Fairbanks and Alexandros Mograine visited King Magni. To avenge Muradin, Magni forged the Ashbringer to oppose Frostmourne, Arthas, and the undead. While Magni never took much stock in the belief that Master dwarven blacksmiths could impart emotions into the weapons they created, standing before The Great Anvil, he found himself thinking of how he would not see Muradin again. He thus harnessed all of his rage, fury, and desire for vengeance, and willed them into being with each strike of his hammer. When he was finished, he gave Mograine the finest blade that had ever been crafted by his hand. This would confirm that he was, at the very least, a skilled weaponsmith of the highest degree.[6]

Aftermath of the Third War

Brann went missing for months, and King Magni lost hope that he lived. Though he remained a wise and strong leader, his pain and sorrow weighed heavily upon him. Many dwarves wondered whether the kingdom would ever see another Bronzebeard sitting on the throne of Ironforge.[7] However, Brann appeared, seeming to have survived his Silithus venture and somehow depositing the base of Atiesh into C'thun's otherworldly carapace. Much to Magni's dismay, Brann again managed to misplace himself within Outland and then again in Northrend.

King Magni's only child, Moira Bronzebeard, was captured by Emperor Dagran Thaurissan, and was thought to be under a magical charm spell, serving the evil emperor without question. Thaurissan made her fall in love with him, and together, they conceived a child. Much to the kingdom's despair, Magni's grand heir would apparently be a dwarf who was both the heir of the King of Ironforge and the Emperor of Blackrock.

Magni diplomatically approached Stormwind for assistance against the ever-increasing Dark Iron threat, citing their destruction and control of the Thandol Span. Much to his frustration, his pleas fell on deaf ears. While Bolvar concured with the dwarven king, Lady Katrana Prestor, advisor to the recently returned King Varian, accused Magni of trying to involve Stormwind in the dwarves' personal war, and refused to send reinforcements. Luckily, Jaina informed Magni of the appearance of Lo'Gosh. Lo'Gosh was revealed to be the real Varian Wrynn; he attacked the Dark Iron Dwarves, and later Magni and his dwarves helped him defeat the Dark Iron that controlled the Thandol Span.

In a nightmare caused by the Emerald Nightmare, Magni dreamed that he led a team through Blackrock Depths to rescue Moira. In regards to her son, it seemed that while he accepted that the child would be born, it would be banished forever from the kingdom. He would not allow a son of Dagran Thaurissan to inherit the throne of Ironforge.[8]

During the Cataclysm, Magni was petrified in an attempt to commune with the world of Azeroth. For four years he remained this way, listening to her warnings about the coming of the Burning Legion. Awakening, he remained in a gem form. His brother, Muradin, expected him to reclaim his throne, but Magni chose to allow the Council of Three Hammers to rule. He repeated the warnings he had heard, revealing he was now a servant of Azeroth and would depart immediately to warn the remainder of the Alliance.

Prior to his departure, however, he told his daughter, Moira, how proud he was of her. He had been watching her all her life and would continue to do so.[9]

King Magni Bronzebeard was a Level ?? (Boss) quest giver located in the High Seat in the Great Forge in the dwarven capital city of Ironforge.

He started the following quests:

He ended the quest

Prince Magni Bronzebeard's Silver Coin can be fished from the Dalaran fountain. It bears a wish from when he was younger: "I hope that my father and brothers outlive me. I'll not make much of a king."

He was present at the Elemental Invasion meeting in Stormwind and informed the other Alliance leaders about the Tablets of Ulduar. During the exploration of Ulduar, the dwarves found a set of mystical tablets created by the Titans. Activating one such tablet to protect his people from the Cataclysm, King Magni Bronzebeard fell prey to a terrible curse that fused his statue-like form into the diamond heart of Ironforge itself. To compound this tragedy, Magni's estranged daughter Moira returned, claiming her Father's throne for herself and for her infant dark iron son. In an effort to prevent turmoil breaking out, the Council of Three Hammers was established to succeed Magni.

Following Archmage Khadgar's successful proposition to invite the Horde back to the Kirin Tor, Brann Bronzebeard appeared before the Council of Six (now the Council of Five) with news - Magni Bronzebeard had returned. Brann urged Khadgar to accompany him to Ulduar, where Magni awaited with urgent news on how to defeat the Legion's invasion of Azeroth.

Arriving in Ulduar thanks to Brann's judicious use of a teleport pad, Khadgar and Brann were greeted by a Caretaker, who ushered the group to meet "The Speaker," the title now occupied by Magni. Fighting their way through automated defenses and demons seeking to imprison Magni, Khadgar and Brann came face to face with the former King, who revealed that the ritual that petrified him also connected him to Azeroth herself. Magni learned the truth - that the world of Azeroth was one of the ancient Titans.

Magni led his friends to the Celestial Planetarium, where he told them of the existence of five artifacts - known as the Pillars of Creation - which were now in the hands of Mortals. Khadgar thought the tale of the artifacts sounded familiar, and Magni confirmed that information about them was placed in the hands of the Guardian of Tirisfal, and was still present in Medivh's chronicles in Karazhan. Khadgar departed at once for Karazhan, leaving Brann alone to reunite with Magni, who indicated that Azeroth had plans for him that prevented an immediate return to Ironforge.

After Sargeras plunged his sword into Silithus, Magni reached out to both factions to reveal that Azeroth was dying from the wound. He urged their leaders to set aside their differences to help the titan, revealing that azerite was, in fact, her blood. Adventurers helped him staunch the flow using the Heart of Azeroth.

Despite his pleas, the Alliance and Horde pressed ahead with their old hatreds, especially after the War of the Thorns.

King Magni has several nasty abilities at his disposal including a powerful Thunderclap, Charge, and a massive knock back. In addition, he can launch players into the air, transform into an Avatar which increases his damage and armor, as well as summon guards to aid him. When his health drops low he heals himself by using an ability similar to Lay on Hands. Because Magni has a relatively small aggro range, one healer can drink and resurrect dead players while others still fight Magni.

Be advised that Ironforge is the most populated capital city of the Alliance. To successfully take down the King, the raid group has to attack quickly and give the Alliance as little warning as possible.

It seems that even in death, Thaurissan has won.

You are dismissed, <name>. Before you leave, you may choose your reward from the royal vault.

<King Bronzebeard slumps into his throne to mull over this bizarre change of events.>

It seems that Blizzard has decided to change the appearance of Magni Bronzebeard as seen in the story Nightmares, as well as the action figure and coin by DC Unlimited in the trading card game. 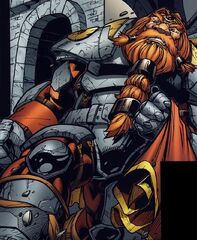 Magni Bronzebeard in World of Warcraft: The Comic. 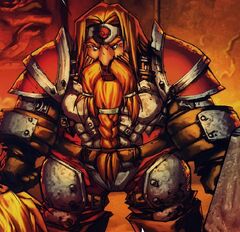 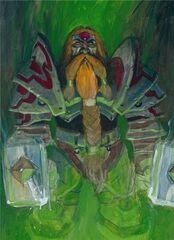 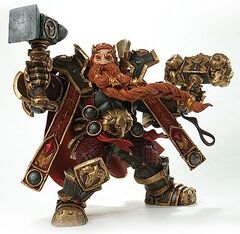 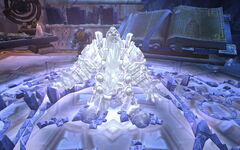