Mannoroth was a pit lord whose ruthlessness and vile cunning made him into one of the favoured lieutenants of his masters, Archimonde and Kil'jaeden, the champions of the Burning Legion. Known as “the Destructor” and "the Flayer", Mannoroth was the barbaric leader of the pit lords when the dark titan Sargeras subjugated them and bent them to his will. When Archimonde was placed in command of the pit lords, he recognized Mannoroth’s value as a brutal, bloodthirsty fighter and made the pit lord his second-in-command. Mannoroth helped lead the Burning Legion in assaults on countless worlds, and led the first invasion of Azeroth.

He is voiced by Arthur Burghardt in Warcraft III: Reign of Chaos.

Mannoroth was among the demons who ventured into Kalimdor during the War of the Ancients.

He singlehandedly slaughtered entire regiments of Kaldorei defenders and sowed chaos by unleashing squads of doomguards across the land.[1] Though he battled with brutal ferocity and slaughtered many, he was defeated by Cenarius and his followers and sent back into the Twisting Nether when the Well of Eternity was destroyed.

Although his forces were ultimately defeated and forced to flee from Azeroth, Mannoroth was pleased with the level of carnage that he had inflicted.[1]

In preparation for the Burning Legion’s second invasion of Azeroth, Kil’jaeden dispatched Mannoroth to Draenor. Describing him to Gul'dan, Kil'jaeden mentioned that "Mannoroth is known for many things. Patience is not among them."[2] There, twelve clan chieftains of the orc Horde drank from Mannoroth’s blood and fell prey to the curse of bloodlust. Their corruption quickly spread to the rest of the Horde and ultimately led to their ill-fated assault on the human kingdoms on Azeroth.[1]

Mannoroth made his mark upon the orcs in Draenor. Many years before the Dark Portal was first formed, Mannoroth, under orders from Kil'jaeden, took part in the plan to put the orcs under the thumb of the Burning Legion. Though he would later say that the orcs were his "by right", it was likely just plain arrogance of his blood pact with the orcs. His own master, Kil'jaeden, could claim rule over the orcs since it was he who discovered them. They would serve as harbingers of chaos, wiping out any potential resistance when the Legion arrived on a world. With the help of Gul'dan, the Blood of Mannoroth was drunk by the chieftains of the clans, with the exception of Durotan of the Frostwolf. They were engulfed by a demonic bloodlust that wiped out countless draenei and damned the orcs forever.

However, after the Dark Portal was opened and the orcs engaged the humans over the course of two wars, they were unexpectedly defeated and routed by the humans. The orcs, and in turn, Mannoroth, had failed. Mannoroth, painfully aware of this fact, made plans to have his vengeance.

Kil'jaeden, however, ignored Mannoroth's desires for vengeance, and crafted a new pawn: the Lich King and his undead Scourge. This Scourge would succeed where the orcs had failed.

Finally, Archimonde was summoned by the lich, Kel'Thuzad, into the world of Azeroth. Mannoroth, eager to finally have his revenge on the night elves and the orcs, followed his master.

Upon arriving in Kalimdor, Mannoroth sensed the presence of Cenarius, and he worried that the demigod could prove to be a chink in their plans. Tichondrius suggested that perhaps the orcs could be used to destroy Cenarius, for the orc who Mannoroth once corrupted years ago on Draenor, Grom Hellscream, was here, and had incurred the wrath of the demigod.

At Tichondrius' suggestion, Mannoroth spilled his blood into a fountain of life, defiling it in hopes the orcs would find it and drink it. Hellscream's witch doctors, sensing the power, initially led him to the fountain, but quickly realized it was cursed, and implored Hellscream not to meddle with it. Grom ignored them and corrupted his clan by drinking its waters. Infused with the powers of the Legion, Cenarius was no match for the bloodlust filled Warsong Clan.

With the demigod dead, Mannoroth appeared and took full control of Hellscream as the true invasion, the Legion's invasion, of Kalimdor began. Realizing that the remaining orcs were still a formidable force under the leadership of Thrall, Mannoroth formed a new plan to take him out.

Thrall found his former friend Grom had fallen under the sway of the legion and vowed to save him. With the help of Jaina Proudmoore and her expedition, the orc-human alliance successfully defeated Hellscream's corrupted clan, captured Hellscream, and purged him of his madness. The taint however, was still within him.

After Thrall reclaimed Hellscream, Mannoroth lured them into the craters formed by the falling infernals, where he hoped to kill Thrall and re-enslave Hellscream. Thrall confronted the demon lord in battle pouring all his strength and hatred for the demon into one powerful blast with the Doomhammer. Mannoroth applauded the effort and revealed that it had caused only a slight scarring of his wing. He then tossed the young war chief against a cliffside with a powerful charge, knocking him out cold and leaving only Hellscream. Mannoroth reminded Grom that he owned his body and soul and gloated that the blood curse could never be broken.

Hellscream then faced the choice between giving into the demon corruption once more or resisting and saving Thrall, and indeed his entire race. Refusing to accept that the orcs were cursed forever, he chose his kin. In a heroic last stand Grom slipped past Mannoroth’s defenses and sliced open his chest.

Mannoroth was thus slain by his greatest creation and most favored pupil, Grom Hellscream — a fitting irony, some might say.[3] The demonic fires erupted outward, destroying the astonished Mannoroth and mortally wounding Hellscream.

With the death of Mannoroth the blood curse on the orcs was finally lifted. After his defeat, Mannoroth's horned skull and armor were spirited to Orgrimmar and were attached to a large, irregularly shaped tree (possibly shaped or newly grown by tauren to accommodate the trophies). However the large double-headed sword used by the mighty pit lord remains in Ashenvale, forever sundered and locked in time to show where the bloodpact was ended. The remains have become a memorial to warn against consorting with demons and celebrating the feat of Grommash Hellscream in finally lifting the blood curse.

Players can see Mannoroth's broken weapon, armor and skull in World of Warcraft.

In The Burning Crusade

In the Burning Crusade we see Mannoroth battle with Grom Hellscream.

In Cataclysm, Mannoroth and Varo'then are the final bosses of the Well of Eternity instance.

Adventurers encounter an alternate timeline version of Mannoroth on Draenor, but events play out differently with the interference of a Garrosh Hellscream bent on changing the destiny of the orcs.

Mannoroth was a simple being with no overriding ambition to change his station in life. Craving blood and carnage over everything else, he willingly acted as an enforcer for Archimonde and the Burning Legion. His only desire was to wage unending war against the mortal races of the universe. He was a terribly efficient weapon of destruction for the demonlords and could always be found at the forefront of their invasion forces. Mannoroth had forever been cursed with an immeasurable, unending thirst for blood. Even the bloodlust of the orcs was a minor compulsion compared to the absolute addiction that bloodletting was for Mannoroth. In the absence of mortals to fight, Mannoroth often turned on his own demon kin, slaying felhounds and infernals with an unnerving sense of satisfaction. He preferred the kill to the chase, and would quickly slay mortals who were unfortunate enough to stumble upon him. Mannoroth sought out the most concentrated area of foes and wades into battle. He was not happy unless he was spilling the entrails of his enemies at his feet. When a victim fell, he usually spent an extra attack or two on the victim making sure the target was quite dead. This could be quite messy, which was exactly how Mannoroth liked it. In fact, he could get a bit reckless if foes were not dropping to his massive two-bladed sword at least every attack.[4] 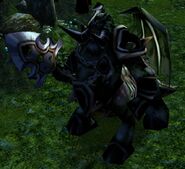 Mannoroth as seen in Warcraft III.

Mannoroth as seen in Warcraft III.

The Mannoroth model used in the Warcraft III cinematics. 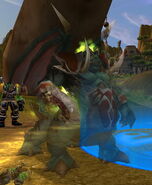 Mannoroth as seen in a vision in Nagrand. 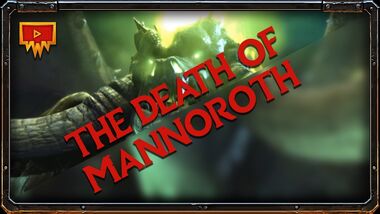 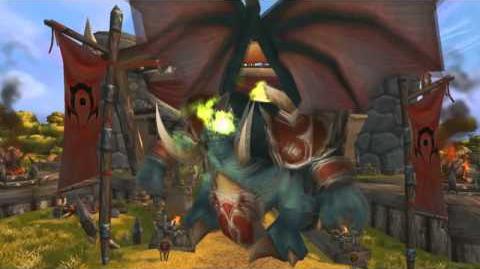 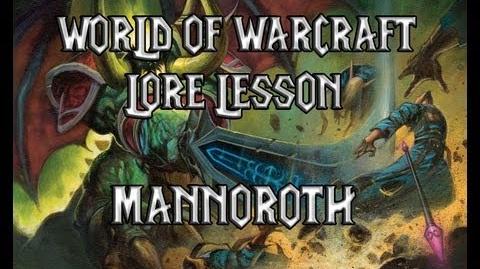