March of the Scourge

The Cult of the Damned
The Prince and the Prophet

March of the Scourge

"March of the Scourge" is the fifth chapter in the Human Campaign The Scourge of Lordaeron. It involves the player defending their base from a large undead assault. There is also a Side Quest in which the player is given the option to go out and destroy a caravan of plagued grain before it infects all the outer villages.

Arthas Menethil and Jaina Proudmoore arrive at the village of Hearthglen where they discover the inhabitants are preparing for battle. The commander of the town guard tells Arthas that an undead army is coming to attack the village. Arthas tells Jaina to go and find Uther while he stays and defends the town. Jaina reluctantly obeys and teleports away.

Arthas then notices some suspicious-looking crates nearby. He asks what was in those crates. The commander replies that it was just a shipment of grain from Andorhal and that the grain has already been distributed amongst the villagers. Suddenly, several of the villagers fall into a strange sleep and are transformed into zombies. Arthas realizes that the Scourge plague not only kills people, it brings them back as the undead.

Arthas and his troops swiftly dispatch the zombies. Soon afterwards the Scourge army arrives and begins its assault on Hearthglen. Arthas rallies his men and they fight off wave after wave of undead.

In the middle of the battle, Arthas learns that a caravan of plagued grain is passing through the area infecting other villages. Arthas and a small group of men track down the caravan and ambush it. They slay the undead escorts and destroy the Meat Wagons carrying the plagued grain. Arthas and his troops then hurry back to the village.

As the siege of Hearthglen continues the undead grow stronger and stronger with every attack. The defenders are slowly being whittled down. Finally, the undead launch a massive assault against the town. This attack is led by a pair of Liches who use their destructive powers to breach the defenses. Countless undead pour into the town and start overwhelming Arthas' forces. Arthas is on the verge of defeat when suddenly Uther and Jaina arrive with an army of Silver Hand knights. With the undead now caught between Uther's forces and the remaining town defenders, the tide swiftly turns in favor of the humans.

After the last of the undead are defeated, Uther and Jaina meet with Arthas to discuss the situation. Despite having won the battle, Arthas is humiliated that he almost lost. Uther sternly tells him that they can't afford to let pride distract them. What happened here was only the beginning. Arthas argues that the best way to defeat the Scourge is to kill their (supposed) leader Mal'Ganis who resides in the city of Stratholme. Uther warns Arthas that he can't do this on his own. Arthas retorts that he is going after Mal'Ganis with or without Uther's help.

While waiting for another attack, get Arthas on the road from where they came to Hearthglen. There should be a small farm with two villagers. They will turn into footmen, which will help you defend Hearthglen and their land.

There is also group of humans near your base, but unluckily, they will become Zombies due to Plague.

A captured villager will give a potion then runs away to either Hearthglen or to the woods.

Defend Hearthglen as much as you can. It's not recommended to go on offensive, the undead army being too numerous to take down. But if you want to end the mission by destroying the Scourge forces, prepare a force strong enough to crush both bases. Building a large number of Mortar Teams and researching Black Gunpowder can make it very effective for destroying enemy units and buildings.

Crush the Undead Caravan before they go to the last village and your base and cause a chaotic outcome. The Caravan converts villagers into Zombies, but the Zombies never leave the village. The best time to do this is with a basic group of 12 units mustered as quickly as possible, with at least 6 more left to defend you base. As soon as you can (preferably when the caravan is right before or at the first village), defeat the next Scourge wave and exit out the lower-west exit. Move left until you get to a stream, infested with nearly a dozen low level murlocks. Fight through them, then continue through the stream until you get to the green undead base. You should be able to run you forces around the edge, and as long as you don't stop to attack the Ziggurat, there won't be a response to your forces. Your forces are new either direcly infront of the caravan, or behind it as it's moved ahead to the first village. Charge in and focus on killing the Meat Wagons first, then defeat the guards. Don't worry about casualties, as Arthas should be level 6 and have his Ressuraction spell unlocked (brining back 6 dead units). After their defeat, there's a fountain of healing to the left of the first town and a group of Ogres that come to it. Kill them for a Gauntlets of +3 Strength. Return to where you defeated the caravan and use the dropped Scroll of Mass Teleportation if you need to get back to base in a hurry.

There is an unoccupied mine at the northeast corner on the map, make use of it, but Undead Scourge will check and attack it. If the Undead Caravan reach the last village, this mine will also be exposed to great danger. So defense of that spot is necessary.

It is recommend that you complete the side quest as to prevent the scourge from attacking you on all 3 fronts.

The last wave of Scourge forces are notably large in number, especially in Hard difficulty. Stalling is the only option.

On Normal Mode the Scourge will largely ignore the opening on the eastern side of the base. 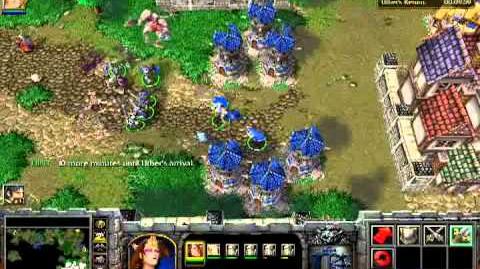 ParaFreak Warcraft III Reign of Chaos March of the Scourge

Destroy Everything at March of the Scourge Hard