Can communicate with most mortal races

Mechagnomes are small gnome-like clockwork creatures who are found in Northrend. They have a strong connection to the titans, although it's unknown exactly what their original purpose and reason for creation is. Their bodies consists of metallic plates and screws, marked by runic tracks of light. Some of them have mustaches and similar hair-fragments on their heads, also made out of metal. The sounds they make resemble the voices of normal gnomes, just in a "metallic" fashion. 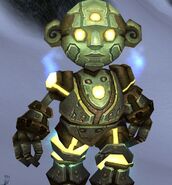 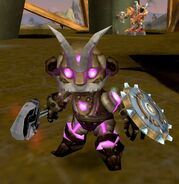 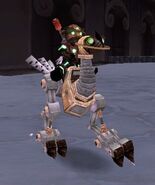 A mechagnome riding a mechanostrider.

They are also likely inspired by Tik-Tok from the Land of Oz books. The Mechagnomes bear a strong resemblance to the Mechanical Man of Oz with their rounded heads and bodies and their metal mustaches. The Mechagnomes are the ancestors of Gnomes similar to how Tik-Tok, credited as the first robot in modern literature, could be considered the ancestor of other robots. Additionally, Mechagnomes are classified as clockwork constructs (Clockwork Gnome) just as Tik-Tok is a clockwork man who needs to be wound up.