After betraying his kind to the naga under Lady Vashj's rule, Mennu the Betrayer and many fellow Broken subordinates now guard the Slave Pens in Coilfang Reservoir. It is likely that many of the Broken found in cages throughout Coilfang Reservoir are there because of Mennu's treachery. Mennu is an example of a Broken who has found a way to turn Illidan's reign of terror to their advantage, by betraying his fellow draenei he gained favor with his naga overlords.[1] His betrayal has tainted his shaman training, and he now wields corrupted totems, which make him a formidable opponent for any group. He is the first of the three bosses in the Slave Pens.

Heroic mode: Explodes after ~15 seconds or when destroyed for around 6500 fire damage in a 10 yard radius of the totem. Melee DPS should put on gear in which they get ~7.1k health so they can survive a higher end damage range if the totem is accidentally destroyed. Ranged DPS and healers should take care not to stand close to the totem because higher end damage will probably oneshot them.

Heroic mode: Hits for about 2600-3200 nature damage, cast only on the character who currently has aggro. Uninterruptible.

Fighting Mennu is an endurance test. He has 60,000 HP and healing abilities, but doesn't put out a lot of damage. It is, however, critical that his totems be killed relatively quickly.

Mennu paths up and down a ramp which you use to get to Rokmar the Crackler. The mobs at the bottom of the ramp pull in two separate groups, though neither of them must be pulled to kill the boss. Mennu can be pulled at range as he is going up the ramp and he will not aggro the groups at the base of the ramp. After he is dead, these groups can be avoided by going around behind the ramp to the other side and up the ramp. Caution: Lower level characters may aggro these mobs after the boss is defeated when mounting the ramp.

Healers should not have any trouble healing through damage. An excellent strategy is to have the tank walk backwards in a large circle while keeping aggro on Mennu; this will ensure that he is out of range of his totems most of the time. Note that hitting his Corrupted Nova Totem will cause it to go off instantly, so avoid shooting it whenever possible. Any class can one-shot the totems, so even the healer can deal with most of them via wanding, simple melee damage or rank one Earth Shock/Moonfire.

Grounding Totem will absorb lightning bolts (in both heroic and non-heroic modes), and warriors can use Spell Reflection on them.

Heroic Mennu the Betrayer is fundamentally the same fight as the non-heroic. He is generally considered to be the easiest heroic boss but his totems (particularly the Corrupted Nova) can quickly ruin the fight if left alive. Use the same strategy as normal mode Mennu, having the tank walk backwards in a large circle while a party member kills all his totems but the Corrupted Nova. 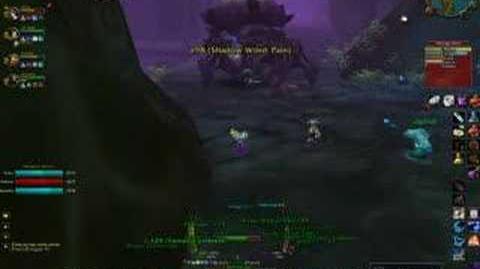