Were you looking for lore on monks or related articles, see Monks category?

Mists of Pandaria introduced the monk class.[1] Monks are a hybrid class. Masters of bare-handed combat, monks choose to draw their weapons only for devastating finishing moves. Monk healers bring harmony and balance to every group, healing even the most grievous of injuries with ancient remedies and focused spiritual arts.

Like druids and rogues, monks use leather armor and can't use shields, but can use off-hand items.[2] Monks can use the following weapons: fist weapons, one-handed axes, one-handed maces, one-handed swords, polearms, and staves. 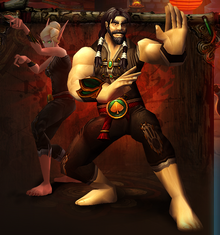 When the Pandaren were subjugated by the mogu centuries ago, it was the monks that brought hope to a seemingly dim future. Restricted from using any type of weapon by their slave masters, these Pandaren instead focused on harnessing their chi and learning weaponless combat.

Pandaren masters have chosen to share their ancient martial arts with young fighters in both the Alliance and Horde. Harnessing their inner strength and potent "chi" energy, monks are extremely capable in every role: damage, defense, and healing.[3]

Mists of Pandaria Beta, the monk class can be played by the following races:[2][4] 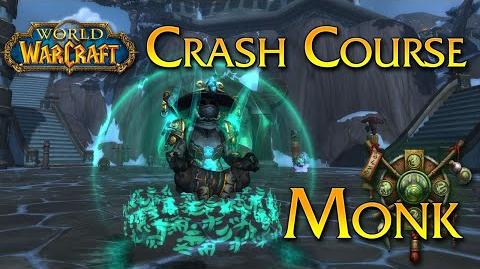 WoW Insider So you want to play a mistweaver monk? by Chase Hasbrouck Jul 5th 2012 at 7:00PM

WoW Insider 5 monk abilities that should have you excited for Mists of Pandaria by Josh Myers Apr 10th 2012 at 4:00PM