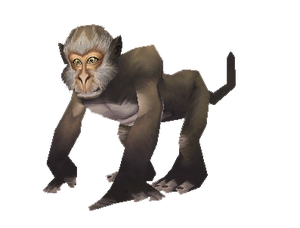 Monkeys were introduced in World of Warcraft: Cataclysm as one of the sapient races on the Lost Isles. Many monkey species are tree-dwelling, although there are species that live primarily on the ground. Most species are also active during the day. diets differ among the various species but may contain any of the following: fruit, leaves, seeds, nuts, flowers, eggs and small animals (including insects and spiders). Monkeys are a distant relative to the pygmy. They have been enslaved by the pygmy race to mine Kaja'mite. The Kaja'mite has affected the monkeys and granted them extra intelligence.

The lowest level of monkeys may only be tamed by goblins during the introductory goblin starting experience on the Lost Isles.

Though hunters can respec their pet monkeys into Ferocity or Tenacity, they are inherently Cunning. In addition to the abilities that come standard with all pets ([Growl] and [Avoidance]), and those given to their natural or retrained specialization, all monkeys are given the following:

The subspecies below can be tamed by hunters. Most monkeys below come in a variety of colors that include black, brown, dark grey, and grey. Exceptions to colors are noted, as well as those that can only be trained by goblin players on the Lost Isles.