Moonkin Form is a shapeshift form learned by druids at level 20 who have chosen the Balance specialization. This form enables a druid to specialize in DPS spellcasting. This form had its first graphical only upgrade in the legion expansion and lacks different appearances. Unlike cat or bear form balance druids only have 1 appearance. 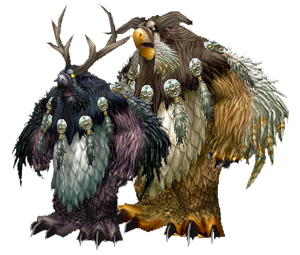 Moonkin tanks ("Panzerkins") can be a strong alternative to non-tank specs through decent damage mitigation and high DPS (versus main tank specs). Moonkin tanking is rare for many reasons, but Moonkin have successfully tanked Karazhan, Gruul's Lair and most 5-man heroics. Gearing is problematic; PvE rewards do not generally support Moonkin tanking, but the Arena Rewards for druids provide some of the balance necessary. Keep in mind that moonkin armor is equivalent to plate, but will still be lower than most warriors, feral druids, and paladins because of the lack of armor-increasing talents and abilities.

Moonkin have several abilities that are key to surviving in PvE. Among them are [Cyclone], [Entangling Roots], and [Barkskin]. Cyclone and Entangling Roots gives the Moonkin CC capability which is essential for surviving accidental overpulls or aggro.

Barkskin is useful for mitigating damage and also allows the druid to shift back to caster form to cast healing spells. Barkskin helps to reduce armor lost from shifting out of Moonkin Form.

Moonkin may also consider using the [Typhoon] talent which knocks targets back and dazes them for a short period of time.

Balance druids also have [Starfall], which is capable of AOE damage to enemies in a very wide area dealing high damage.

The key to PvP fights lie in maneuverability. The Lunar phase of [Eclipse] pumps out more DPS, so the druid will want to be in that whenever possible. While moving, instant cast spells are a must, especially [Moonfire]/[Sunfire], as use of them will proc [Lunar Shower] (level 82 ability). Plating [Wild Mushroom]s while on the run is smart, as is timing their detonation.

Obviously if the druid gets a chance to stand still they should use their high damage nuke abilities. Remember that [Solar Beam] can also be used against enemy casters.

BalanceDruid.net A Blog on all things Moonkin (Balance Druid)