Mounts are a much sought after form of transportation in which players ride atop the backs of various more or less exotic beasts (or machines). They can be accessed via the Mounts and Pets window. Warlocks, paladins and death knights can learn to summon mounts as a class perk. The Alliance Worgen have a race skill Running Wild that they will get at level 20. Druids can shape shift into multiple forms that improve their speed. Mounted travel is almost always faster than walking/running (some vanity mounts such as Sea Turtle provide no speed benefit on the ground).

Cataclysm opened up much of Azeroth to flying mounts.

Mounts were generally expensive in the past, but their prices have been reduced while the training to ride them increased in order to compensate. However, some mounts do not cost any gold or other currencies (such as honor points) and will drop at very low drop rates from bosses in instances such as Stratholme, Zul'Gurub, Tempest Keep, Magisters' Terrace, Sethekk Halls, Karazhan, and Utgarde Pinnacle. There are numerous other methods to obtain mounts as well, such as class quests, completing achievements, and even a select few rare spawns drop mounts.

Mounts have a 1.5 second cast time, which will be interrupted by taking any damage, moving, or entering combat. Mounts also have a special emote that can be seen by either jumping (the Space key by default) while not moving or performing the /mountspecial slash command. For example hawkstriders will shriek and horses will rear up on their hind legs.

Cataclysm, speed is not based on mount class but only on riding skill.

There are a total of five classes of mounts:

Ground mounts cannot fly, but flying mounts are able to run (or fly) along the ground in areas where flight is prohibited. Both flying and ground mounts can swim (but not any faster than swimming without a mount). Aquatic mounts can walk on land (but not any faster than walking without the mount). Vanity mounts confer no benefits (and thus, require no riding skill or character level).}}

At level 40, paladins and warlocks can learn [Summon Charger] and [Dreadsteed] from their class trainers after learning the Journeyman riding skill from the riding trainer. There is no need to purchase a new mount. Death knights receive their epic ground mount, the [Acherus Deathcharger], after the completion of the quests Grand Theft Palomino and Into the Realm of Shadows at level 55. Druids can learn [Flight Form] from any flight trainer at level 58.

In areas where flying is allowed, a character typically needs to train a specific

Riding skill in order to unlock the ability to fly in that region. These types of skills and their requirements can be found in the table below.

The guild perk [Mount Up] will increase your riding speed by 10%.

Through class abilities and talents

Shaman and Druids acquire shapeshift forms ([Ghost Wolf] for shaman and [Travel Form] for druids) that increase their movement speed (not as much as a mount, but it is trainable at an earlier level), while Hunters get aspects to boost their own movement speed and that of their party. Rogues and druids (in [Cat Form]) have an ability to temporarily increase movement speed. Here are the skills and abilities that provide some classes with a bit of a faster mount movement speed, either passively or by the activation of an ability.

Through items and enchants

There are five other methods for increasing your mounted speed, with no effects beyond level 70:

These last two items effectively increase a mount's speed by 10%. However, they do not stack with the previously mentioned methods, so they are approximately (see below) a 1% improvement over using the above 3 items combined. It should be also noted that for players of WotLK the Riding Crop is only usable for two levels (69 and 70), and the Skybreaker Whip only for one level (70).

All speed improvement items work on both normal and flying mounts (with the exception of npc controlled point-to-point flight).

Characters higher than level 70 will not benefit from mount speed improvement items and enchants. With Cataclysm, the following are no longer available:

The tables below are separated based on mount source, such as purchase requirements, killing specific creatures, participating in world events, completing achievements or more.

Racial land mounts are typically the first mounts players will acquire. To purchase a racial land mount, players must either purchase their race's mount (such as horses for humans, or wolves for orcs), or gain exalted standing with that race's representative faction (such as exalted with Darnassus to purchase sabers). Flying mounts do not require any reputation rating.

In the initial release of

Cataclysm, the worgen did not get a racial mount, but instead used the ability [Running Wild] to achieve mount-like speeds. However, a mountain horse mount (regular and swift) was added in Patch 4.3 as the worgen racial mount.

There are four classes in the game that can acquire special mounts and abilities linked to their own class through lore: death knights, druids, paladins, and warlocks. The original quests to gain the paladin charger, warlock dreadsteed, and druid's swift flight form are all still in-game and reward feats of strength if they are completed. The aforementioned quests are not required to learn the ability, however, and are on the class trainers at the level listed in the table.

Druid and paladin abilities are slightly different based on race and faction. For example, the Alliance charger is blue and golden, while the Horde version is red and bronze. Similarly, night elf druids are black in flight form, while tauren are tan. With Cataclysm, it seems that tauren and draenei paladins will not be getting chargers, but special types of Kodo and Elekk mounts, respectively.[3][4]

PvP mounts can be obtained by exchanging honor points or other world PvP currency. For Arena rewards, see the Arena section.

Rarely, specific creatures will drop a mount as a reward. If the mount drops, only one mount will appear per kill, no matter the size of the party or raid killing the creature. Also, mounts may rarely be inside other containers rewarded for doing other objectives.

A guaranteed drop mount will result in one mount being awarded upon killing the specified creature under the condition listed, regardless of the size of the party or raid. For mounts rewarded such that everyone who completes the achievement gets the mount, see the "Achievements" section. There is no direct achievement for killing the Time-Lost Proto-Drake; the hard part is actually finding the drake alive.

Mounts can also be created by players via professions. Typically such mounts are a perk of the profession and are not available to other players, but a few are.

These mounts are available to all players, with no requirements outside of gold or emblems.

A major draw of the Argent Tournament is the large quantity of mounts rewarded in exchange for [Champion's Seal]s.

Amphibious mounts confer a slight increase in swim speed, but move no faster than walking while on land. Amphibious mounts do not give their riders the ability to breathe underwater, so plan accordingly with one of appropriate items or abilities.

Aquatic mounts confer an increase in swim speed, but cannot be used at all on land. Aquatic mounts do not give their riders the ability to breathe underwater, so plan accordingly with one of appropriate items or abilities.

These mounts are obtainable by completing certain achievements. As part of completing the achievement, the mount will be mailed directly to the player, or available for purchase at select locations.

There are several disguises and time-limited items that are available during holidays. Disguises simply turn the player's mount into something "more festive" like a kodo or a reindeer but do not otherwise affect mount mechanics. Time-limited items exist only during the duration of the holiday itself. Previously, time-limited items had a set time such as seven or 14 days, but were changed to be directly tied to the holiday.

Back during Brewfest 2007, an ["Honorary Brewer" Hand Stamp] was available for purchase and granted access to the [Brewfest Ram] and [Swift Brewfest Ram] vendors. Coren Direbrew (the holiday boss in the Grim Guzzler of Blackrock Depths) had not yet been implemented, so completing the quest was the only way to get the mounts. The hand stamp was removed for the 2008 Brewfest and the Swift Brewfest Ram added to Coren Direbrew's loot table (along with the new [Great Brewfest Kodo]), but the 60%-speed Brewfest Ram can no longer be purchased except by players who completed the Hand Stamp quest.

Outside of game mounts

The mounts in previous sections are acquired using solely in-game means. The mounts that follow require some real-world interactions, such as getting a rare loot card in the TCG, going to BlizzCon, the Recruit-A-Friend program, sending a Scroll of Resurrection, or purchasing mounts from the Blizzard Store.

At the end of each Arena season, the top 0.5% of teams in the 3v3 and 5v5 bracket each battlegroup are rewarded with a 310% speed flying mount. Such mounts are inherently time-limited and are not currently available.

These mounts are no longer obtainable in the game.

At BlizzCon 2009 it was revealed that flying mounts would be available in some form to use in Kalimdor and the Eastern Kingdoms with the release of the next expansion, titled "Cataclysm". Blizzard officials had previously stated that it was unlikely that they would allow flying mounts in these continents, since doing so would require them to re-design the continents with flying mounts in mind.

Throughout the first few years of World of Warcraft (up to and including Wrath of the Lich King), the Eastern Kingdoms and Kalimdor were unsuitable for flying mounts; there were visual glitches like mountains and high buildings whose tops could not be seen from ground-level, and places where the terrain abruptly changed from one tileset to another, creating a grossly unrealistic appearance in some areas. There were also zones which should have existed lore-wise, but were empty and unfinished.

With the release of Cataclysm, rebuilding the continents is precisely what zone developers did, allowing players to finally see the world of Azeroth from above.

Vanity mounts only exist to put the player on a mount. They confer generally no bonuses to movement speed, and thus require no riding skill. The two non-temporary, vanity mounts are the [Rickety Magic Broom], a fairly common reward for completing daily quests during Hallow's End, and the [Riding Turtle], available from the TCG. 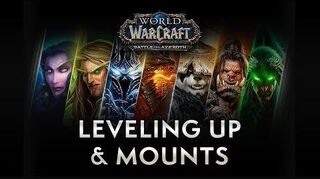 How To Get Every WoW Legion Patch 7.0 Mount! Guide

WarcraftMounts.com Images of all the currently available mounts!

Polygon.com How to acquire every new mount in World of Warcraft: Legion by Philip Kollar Oct 3, 2016, 6:00p

WoW Insider All you need to know about account-wide mounts (so far) by Anne Stickney May 7th 2012 at 5:00PM

WoW Insider Mists of Pandaria beta: Account-wide mounts are a go by Anne Stickney May 4th 2012 at 2:07AM

WoW Insider WoW Insider's Guide to the Mounts of the World of Warcraft by Adam Holisky Apr 29th 2008 at 11:00AM