King of the Frostborn (as Yorg Stormheart), formerly the Ambassador to the Kingdom of Lordaeron,

Muradin Bronzebeard is a hero of the Alliance, the younger brother of the dwarven King Magni Bronzebeard and the older brother of the renowned explorer Brann Bronzebeard. Muradin was believed to have perished in Northrend when the young prince Arthas Menethil claimed the runeblade Frostmourne. However, recent events have indicated Muradin survived this brush with death, and wandered the wastes of Northrend with no memory of the incident until a chance encounter several years later.

During the Second War, Muradin served as official liaison between Lordaeron and Khaz Modan, and accompanied the Alliance armies shortly before the battles at Blackrock Spire and the Dark Portal. During that time period he grew close to the Royal Family, and befriended the young Prince Arthas. As Arthas grew up, Muradin took it upon himself to teach the lad all he knew about fighting with blades and the two became close companions on many adventures.

Muradin was also one of the founding members of the dwarven Explorers' Guild, which was dedicated to exploration and archeology across the world. In his travels, Muradin visited Northrend and became fascinated with the desolate continent. He returned to it often, observing its ferocious natives and sketching its ruined architecture. It was during one expedition to Northrend in search of the runeblade Frostmourne that Muradin met Arthas for the final time. In his obsession to destroy the Dreadlord Mal'ganis, Arthas had Muradin lead him to Frostmourne, betraying his own men in the process.

The older and wiser Muradin was distressed by the change he saw in the young prince, but Arthas refused to listen to his counsel. Muradin gave a final desperate warning about the cursed blade, and was thought then to become its first victim when the ice imprisoning it shattered and impaled him. It seems that there are some accounts which claim it was Arthas who caused Muradin's "death" when claiming the sword[1][2] (which is true from a certain point-of-view if one stops to consider that it was Arthas who caused the explosion and didn't care in the least). But unbeknownst to everyone Muradin had survived his wounds and currently suffers from amnesia.

In World of Warcraft: Wrath of the Lich King, in a quest in the Frostmourne Cavern in the Dragonblight, players can see a flashback of the interaction between Arthas and Muradin prior to Arthas claiming Frostmourne. It turns out that Muradin was not slain when the ice encasing Frostmourne shattered, but was merely wounded. A short time after Arthas left, Muradin awoke. Confused, hurt, and with total amnesia, he wandered out into the snow.

Muradin was eventually tracked down by a group of Frostborn dwarves, who followed his trail of blood-soaked snow during an extremely harsh blizzard. These Frostborn just happened to be on their way home to Frosthold from a trek across the Dragonblight. Not about to let their new-found cousin freeze to death, they took him along with them, and a short time later they came under attack by a jormungar. After slaying the worm single-handedly and saving the dwarves, they took him in and gave him the name Yorg Stormheart, after a legendary Frostborn warrior. Eventually, Muradin/Yorg became King of the Frostborn and brings his people into the Alliance, which had begun journeying into Northrend to do battle with the Lich King, the renegade blue dragonflight, and the iron dwarves. Despite his people befriending the Alliance and the Explorers' Guild, he expressed concern over involving his people in wars that would result in their deaths.

After a long Alliance quest chain, Muradin is reunited with both Brann and Magni, and recalls his lost memories. He then leaves the frost dwarves to hunt down Arthas. The game then phases, causing Muradin to be replaced by Velog Icebellow.

Muradin commands the gunship Skybreaker during the Gunship Battle in Icecrown Citadel.[3] Alliance players can also find him standing near Tirion Fordring inside Icecrown Citadel at Light's Hammer.

If a raid member brings [Arthas' Training Sword]​​ to Muradin, who stands in Light's Hammer, regardless of faction after the Lich King is defeated, he wishes he was able to stop Arthas from claiming "that accursed blade."

Just before the Plagueworks was opened up as part of the endgame raid for Wrath of the Lich King, Muradin Bronzebeard made the following remark if Alliance players spoke to him after killing Deathbringer Saurfang:

"I've brought in the best gnomes we've got to get those doors open. They're estimatin' that it's gonna take another 28 days before that door comes down!" [1]

In Cataclysm, Magni was turned to stone after performing a ritual in Old Ironforge; Muradin, his daughter Moira and Thane Falstad Wildhammer succeeded him as leaders of the dwarves, ruling from the High Seat.

Muradin is a kindhearted dwarf, fond of good ale and good company. He is a steadfast ally and a ferocious enemy. His years abroad have tempered his Ironforge accent, and he carries himself proudly — he represents both the Bronzebeards and all of Khaz Modan. He enjoys a challenge, whether in exploration, game or battle. Muradin relishes a good fight and willingly throws himself against his enemies. A dwarf of many interests, he appreciates foremost ancient architecture, new lands, strange creatures and the mysterious Titans. Muradin possesses high morals and ethics, always helping those in need and smashing evil whenever he finds it.[4]

Muradin begins a battle by activating his stoneskin ability and grabbing his long rifle, blasting away at the most powerful opponent he can see. When the enemy closes to within range of his hammer, he attempts to stun opponents with his Storm Bolt feat before charging into melee, activating his stone flesh ability at the same time. Against a single opponent, or when fighting alongside powerful allies, he uses his Bash feat to keep foes out of the action.[4] 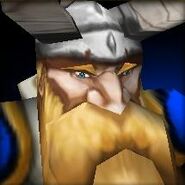 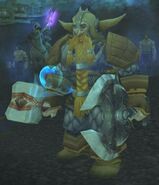 Muradin in a flashback. 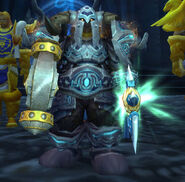 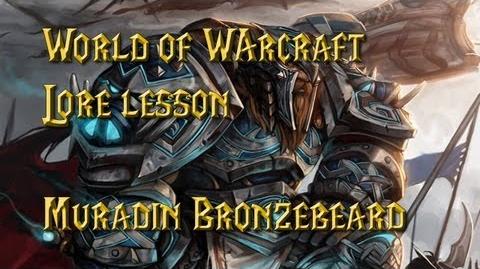 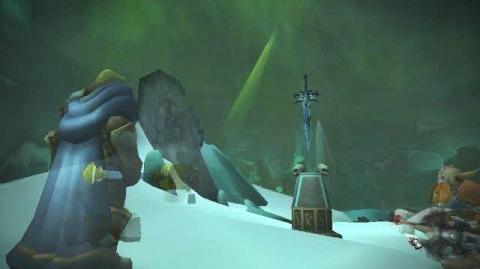