Murmur is the fourth and final boss of Shadow Labyrinth, an instance wing of Auchindoun. It bears an appearance similar to Ragnaros and Thunderaan.

Murmur is an incredibly powerful elemental born when the Universe was created, about whom little is known. The Shadow Council inhabiting the Shadow Labyrinth summoned it for their nefarious purposes, but seem to be having trouble keeping him under control. Its history is briefly documented in the Codex of Blood, which reveals Murmur is the primordial essence of sound.

"In the beginning"... "So far away"... such phrases cannot begin to describe this elemental's origin. Its existence heralds pure destruction. Worlds shatter and the pieces scatter at its whim. Only the truly mad would think to summon it. Perhaps there is yet time to banish Murmur before it fully enters Outland."

The fight versus Murmur is relatively easy when everyone understands their role in the fight. No resistance gear is required.

Murmur starts with 40% health, which is a total of around 169k. Murmur is stuck to the place just like Ragnaros and he has an aggro range of 10-15 yards. Additionally, he uses a powerful ranged attack if there are no possible melee targets.

The main tank will run in and get aggro while the rest of the group spreads out at maximum spell/attack range to avoid extra damage from the AoE explosion from the Touch of Murmur effect.

Periodically, Murmur will pulse and emote. At this point, he will stop attacking, and the tank and any melee will need to run out of the circle around him, or they will be hit by his Sonic Boom. Warriors should Intervene to someone standing outside the ring. This will almost guarantee no damage from Sonic Boom. The tank will then need to get back in range immediately.

Alternatively, the tank can stay in and take the hit from the Sonic Boom. A large heal will need to be timed right after the hit, in order to restore his health before Murmur resumes attacking. Rogues can [Cloak of Shadows] through a Sonic Boom if timed correctly.

The ranged classes will be primarily concerned with Murmur's Touch. Everyone needs to watch for this debuff and run away from his teammates to avoid damaging and silencing them. Spells such as [Divine Shield] will prevent damage from occurring to the person with the debuff, but the AoE effect still occurs. A common tactic to avoid the fall damage that results from being launched in the air is for the player with this debuff to run into the tent situated in the area.

If a healer receives Murmur's Touch, he should watch the countdown timer carefully and make sure the tank is healed to near-full before Murmur's Touch goes off. The explosion will interrupt the healer's spellcasting, and since he's considered to be "moving" while he's in the air, the healer won't be able to cast any healing spells other than instant-cast spells until he lands.

Everyone must position themselves completely within Murmur's raised inner circle to avoid his Thundering Storm—if you're on the raised ledge or outside you will be hit by Thundering Storm.

Have all players close, on the flat ground immediately next to Murmur. When Touch of Murmur occurs, there is a large, very visible green beam and all players are drawn to the target. The person with the debuff should run through Murmur to the back, where he can detonate without hitting party members. He can then run forward and resume the fight. Alternatively, use fighting positions such that no party member is within 10 yards of any other, and everyone can simply run back to their positions when drawn to the target of the touch.

Murmur is surrounded by a raised ring. Stay completely inside the ring—not on the inner slope, but on the flat part of the floor—to avoid Thundering Storm. When Murmur starts casting Sonic Boom, run across the raised ring to get completely outside of it. When he finishes casting it, run back inside of the ring. The raised ring itself, including both slopes, is a death zone—characters standing on it get hit by both Sonic Boom and Thundering Storm. The Sonic Boom has a snare component, so victims take a long time to get back inside of the dark ring, take multiple Thundering Storm hits, and die. Run out and in quickly!

Murmur is very unforgiving about not being tanked in heroic mode; he will start using Resonance almost immediately. Even a tank charging back may not prevent a single application of it. He will also fire off a Thundering Storm immediately after Sonic Boom. 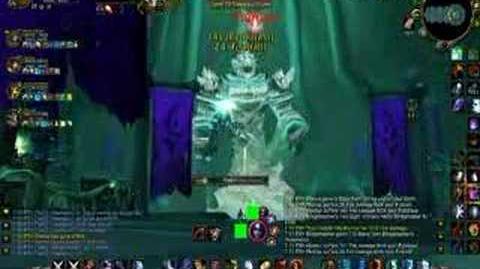