Mushan are giant scaled reptiles with large, webbed back spines and a distinctive under-bite found in large, but shrinking numbers in the Valley of the Four Winds. Apparently they've made Hemet Nesingwary's list of targets.[1] They are very similar to the kodo and are used as beasts of burden by many of the races on the land, including the pandaren. Mushan are distant relatives to the kodo, taking on their own evolutionary line after Pandaria split from the rest of Azeroth.

For years pandaren believed these creatures to be untameable. Just ask the first pandaren to do so, Hemshi "Limp Along" Homebrew. 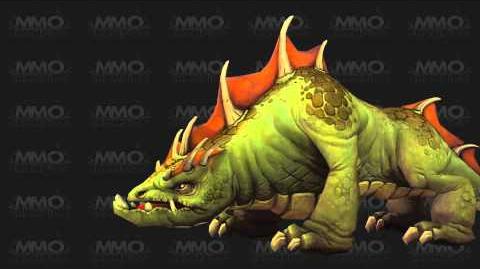 Edit to the right of the section title.
Retrieved from "https://wowwiki-archive.fandom.com/wiki/Mushan?oldid=2754054"
Community content is available under CC-BY-SA unless otherwise noted.