Army of the Light

Able to understand all races via telepathy

The naaru are a dimension-traveling race of sentient energy beings, born from clouds of fractured Light after the creation of the Great Dark Beyond. The naaru use their powers to spread hope and life across the universe. Their energies empower the priests and paladins of Azeroth. The naaru blessed the draenei with this power in an effort to help them in their struggle. They are bent on stopping the Burning Legion.

The name is pronounced ['na:ru]. The plural is simply naaru.

When Sargeras and the Burning Legion came to the world of Argus and began corrupting the eredar race, Velen, an eredar leader, prayed for help. The naaru appeared, offering to take Velen and any other like-minded eredar to safety. Velen and his faction accepted and began to call themselves draenei ("Exiled Ones"). The draenei hastily escaped Argus aboard the Dimensional Ship provided for them by the naaru.

During the draenei's journey, the enigmatic naaru race blessed them with Light-given knowledge and power. The naaru explained that there were other forces in the cosmos that would stand against the Burning Legion. One day the naaru would forge them into a single unstoppable army of the Light. Deeply affected by the naaru's words, the draenei vowed to honor the Light and uphold the naaru's altruistic ideals.

Due to the interests of the Legion, and later certain Azerothians in Outland, the naaru moved Tempest Keep to Outland for a more direct observation. The Keep was stormed by the Blood Elves, but the sin'dorei found only the naaru M'uru within the ship.

In Sunwell Plateau, Velen describes M'uru's essence as "bathed by the light of Creation — just as it was at the Dawn [sic]." This may indicate M'uru (and other naaru) were born at the dawn of creation.

The Naaru make an appearance in the Boon of A'dal quest, but otherwise do not play any major role in the Wrath of the Lich King expansion.

The dimensional fortress Tempest Keep, as well as the Draenei dimensional ship/city The Exodar, are examples of naaru technology.

It appears that the naaru have advanced knowledge of magic and access to otherworldly materials and reagents that have not been seen in Azeroth. Tempest Keep looks much sleeker than most buildings seen on Azeroth; however the texture slightly resembles that of "Wizard" architecture. The only factual knowledge we have is that Tempest Keep has "automated" defenses such as the ability to fly, and teleport itself and anything in it.

It can be overwhelming to the lore considering that these features are usually attributed to the realm of science fiction, but if one looks at it logically it is not so technological after all. The automated defenses are most likely more powerful counterparts of the Arcane Towers built by the Kirin Tor. The Scourge's necropoli (such as Naxxramas) can also fly and move vast distances, so that ability can also be obtained through magic.

In short, the goblins or the gnomes are more advanced than the naaru in terms of sheer technology. What the naaru use appear to be actual machines which are almost as advanced as that of the gnomes or goblins. But these are greatly enhanced by deep and powerful magic to the point where they give the illusion of being highly-advanced sci-fi technology. Or Naaru technology is so advanced it is indistinguishable from magic. It's the same sort of starships we're used to, but powered by the Light instead of nuclear fusion or matter annihilation.

It is also worth noting that the Naaru may in fact be the most powerful "good" beings ever encountered in the Warcraft world. An example of this is a quest line where the player is tasked with finding a cure for the Scourge infection in a dying paladin. The player goes to the Nature spirits of the night elves and Alexstrasza, the aspect of life, who was empowered by the Titans themselves.The player journeys to each in turn to see if they can do anything to help him, but only the Naaru had the power to break the curse of the Scourge and save the paladin's soul. This could, however, also be caused by the Naaru and paladins both being followers of the Light, thus linking them to eachother.

Naaru appear to be energy beings composed of shards of light that may freely move around a central "heart." As such, they don't have a "biology" in the traditional sense. Perhaps they have a "lumenology" or whatever represents the workings of energy beings.

It is unknown whether or not the naaru have separate genders. K'ure, A'dal, and M'uru have all been described using the pronoun "he"[1][2], whereas K'ara is referred to as "she" in the prophet's final message. However, the pronoun "it" has also been used. It is possible that the naaru are genderless, given that "gender" only exists in races that engage in sexual reproduction, and it is known that the Naaru were "born" at the dawn of creation via some other means.

It appears to be possible for certain shattered fragments of a Naaru's body to still retain some essence of their being, as is the case with Light's Heart, the central core of Xe'ra.

Naaru are believed to be immortal.

If their physical form is damaged, it may bleed their energy causing them to enter a "diminished" or "darkened" state in which they are weakened and produce void energies.[3] Their energy may take up to one thousand years to regenerate.[4] It should be noted that some darkened naaru still appear to harbor altruistic intentions, however, their weakened state may be exploited for nefarious purposes, such as creating void minions.[5] It is unknown if this cycle occurs naturally without an external catalyst. The known currently darkened naaru are D'ore, M'uru, and K'ure.

A naaru's darkened state is apparently different than death. Naaru may leave a "spark" when they die, as in the case of M'uru.[6]

Some players have expressed suspicion of the perceived perfection and altruism of the naaru. Some believe that the naaru have ulterior motives, or there is an undiscovered faction of "dark" naaru. As D'ore himself says,

"Without the void, the Light cannot exist."

This could be taken to mean that if these Naaru are pure light and good, then there must be a polar opposite - that is, naaru or another race who are as much darkness and evil as the ones we have encountered so far are good and pure. It should be noted that although D'ore is currently a darkened naaru, he appears to maintain good intentions.

But there is also the possibility that his quote is simply referencing the dualistic nature of the Void/Light dichotomy, that both these forces are defined by their opposition to each other.

M'uru, now a darkened naaru, is now a boss in Sunwell Plateau.[7] It is not clear if he is now "evil", or simply a darkened naaru whose weakened state has been exploited by Kil'jaeden or Kael'thas. After the raid gets him to 0%, he transforms into a void god named Entropius.

Though Blizzard has addressed the confusion.

Q: What is the nature of the Void state of the Na'aru? For a being of the Light, turning into such a dark being seems like a heavy weakness. Sucking in souls and causing destruction simply because of a loss in strength greatly diminishes their saintly image. Though, this might be a reason they don't act in combat very much, as turning on your army due to fatigue wouldn't be good for morale.

A: Because three cases of this "cycle" have been demonstrated in Nagrand, Auchindoun, and Sunwell Plateau (K'ure, D'ore, and M'uru, respectively), players may have received the wrong impression with regard to the magnitude and rarity of these events: it is EXCEEDINGLY rare for a naaru to fall into a void state, and even rarer for a fallen naaru to be brought back into the Light. A naaru's fall into the void represents a catastrophic loss for the naaru and for the forces of the Light, and it is the saddest, most heart-wrenching event for the naaru to witness. Conversely, a naaru being reborn into the Light brings renewed hope and sense of purpose to every naaru; if energy beings could weep tears of joy, this would do it.

In relation to Ashbringer

Speculation exists that Ashbringer was crafted from part of a naaru, or is at least somehow related to the naaru.

Various naaru-related factions exists in-game, some of which you can earn reputation with.

Prior to Patch 2.4, there was also an abducted naaru named M'uru within Silvermoon who was held captive by the channeling of Blood Elf sorcerers. This naaru was the source behind the Blood Knights (Blood Elf paladins) who drained the powers of the Holy Light from him.

At Kael'thas Sunstrider's signal the elves stormed the dimensional fortress, quickly defeating its automated defenses and claiming its satellite structures. The only real threat the elves discovered was a lone naaru who had stayed behind to maintain the keep's defenses. With some difficulty, Kael'thas subdued the energy being and sent it to Quel'Thalas so that the magic-addicted blood elves could feed upon it. Back in the capital city of Silvermoon, Magister Astalor Bloodsworn was not content with this idea. After long months of study and experimentation, he and his fellow wizards learned how to manipulate and corrupt the naaru's luminous energies. In the end, the wizards devised a process by which the powers of the Light could be transferred to recipients who had not earned such abilities. Instead of feeding upon the naaru's magic, the blood elves would wield the naaru's Light-given powers themselves.

After patch 2.4, Kael'thas sent his Felblood minions to Silvermoon, and M'uru was taken.

This section concerns content that is out-of-date. Reason: More added in 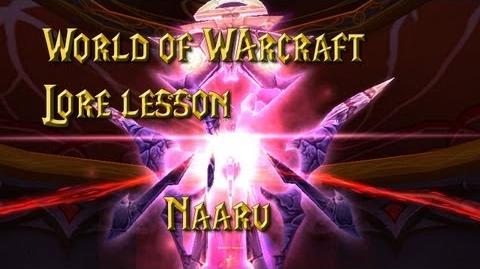 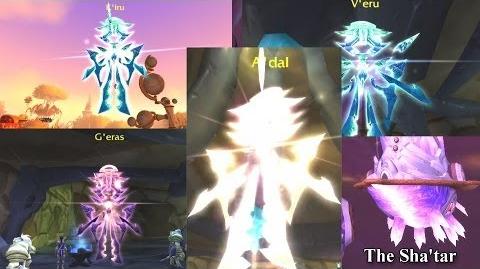 The Story of The Naaru Lore

WoW Insider Know Your Lore, TFH Edition: The naaru are a menace that must be destroyed by Anne Stickney Mar 4th 2012 at 4:00PM