Were you looking for the Outland zone named Nagrand?

Nagrand is a new version of the Outland zone introduced with

Warlords of Draenor. It is located in western Draenor and is the home zone of the Warsong clan of orcs. During this time they are akin to the Mongols, riding their wolves through the region to terrorize any who stand in their way.

Seafaring ogres claim the south of windswept Nagrand, and they seek to dominate both the land and the orcs who dwell upon it. But more cryptic threats abound: a strange mist pours from the center of the plains, embodiments of nature stir around the Throne of the Elements, and the otherworldly crystals of Oshu’gun draw questers and fortune-seekers from all over Draenor.

Nagrand is a verdant land located west of Talador and south of Frostfire Ridge. Here, great beasts cause the ground to quake beneath their feet, and the wolf riders of the Warsong—the legendary orc clan led by Grommash Hellscream himself—are always on the prowl. 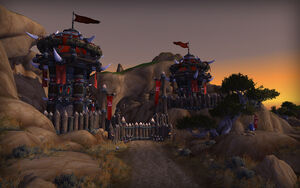 There are big canyons and rocky outcroppings all over the zone.

Halaa and Garadar don’t exist. These were created after Outland became what it did. Highmaul takes up a large portion of the zone, and it houses a Raid instance as well.

Players will be led to Nagrand by a quest they’ll receive in their Garrison that involves sending new supplies to the front. The Alliance and the Horde—not working together, of course—are trying to establish a toehold in the zone in order to take on the Warsong clan. The Warsong clan has had problems with the ogres in the past, but they’re really the top power here.

The Alliance and the Horde get the choice of two different buildings. They’ll be able to build either a Corral or a Tankworks for their Garrison.

For the Corral, they’ll get either a Talbuk on the Alliance or Frostwolf on the Horde, which they can ride all the time while they’re in Nagrand—this is where mounted combat comes into play. If they build the Tankworks, the Alliance gets a Siege Engine and the Horde gets a Demolisher.

At the Throne of Elements the elemental balance has been disrupted, and the elementals upon the plateau have become unstable. It will be up to players to unravel the mystery behind the disturbance before it’s too late. 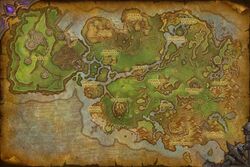 Located outside the main Warsong base and is the Warsong clan’s main presence in the zone.

The Spirit Woods are what surround Oshu’gun.

This became the ogre-inhabited Burning Blade Ruins in Outland. Players get to see more of the backstory of the Burning Blade clan, how their clan operates, and some of their traditions.

Players get to see it a bit earlier on in its existence and learn more about why it’s there and what its purpose is. It’s been built up as a sort of neutral hub, and players will be able to interact with all sorts of NPCs from all over Azeroth and Draenor. 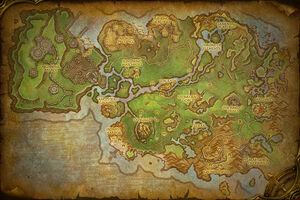