The Horde
The Forsaken

Champion of the Banshee Queen, former Ranger Lord of the Alliance

Amidst our ranks, there are few with more dedication or vigor. - Lady Sylvanas Windrunner[1]

Nathanos Blightcaller (born Nathanos Marris) is the champion and bodyguard[2] of the Banshee Queen of the Forsaken, and a teacher of new Forsaken hunters. In life, Nathanos was the first and only human "ranger lord," trained by the high elves of Quel'Thalas, and was close to Sylvanas Windrunner. He died and became undead during the Third War, joining Sylvanas's rogue Forsaken shortly afterward. As Nathanos Blightcaller, he would stand in the Eastern Plaguelands, battling the Alliance heroes sent to kill him and faking his death. Recently, his body was restored with the help of Sylvanas's val'kyr and now serves his liege with renewed strength.

In life, Nathanos Marris was the first and last of the human ranger lords, trained by the high elves in the ways of war. He was a disciple of Sylvanas Windrunner, formerly Ranger-General of Quel'Thalas and now the Banshee Queen of the Forsaken.

Nathanos's accomplishments were unprecedented. He was a tactical genius, responsible for Alliance victories spanning a decade of conflict.

When the Scourge came, he defended himself at his house, but the mighty abomination Ramstein the Gorger slew him. Nathanos became a mindless servant of the Lich King until he was freed by the Banshee Queen. He took the name Blightcaller and was given the title Champion of the Forsaken.

Nathanos (a level 62 elite quest giver) resided at the Marris Stead in the Eastern Plaguelands with his pet blighthounds. There he recruited Horde soldiers to fight against corrupted animals (such as plaguebats), the Scourge, and the Scarlet Crusaders of Tyr's Hand.

His presence was discovered by the Alliance after five of the best SI:7 agents were sent to investigate the Marris farmstead. Four never returned, and the fifth made it back to Stormwind only to end up dead in his sleep three days later.

Once it was determined that Nathanos was the Blightcaller, King Varian Wrynn enlisted Alliance adventurers to gather an army and destroy him.

Nathanos is absent from the Eastern Plaguelands in Cataclysm. A quest refers to him as the "former occupant" of the Marris Stead, and many of his quests are now given by other NPCs in the zone. He was relocated to Undercity where he offered hunters the option to unlearn their talents.

In data mined audio files, Nathanos' narrative appears to indicate he will lead players on a quest to rescue the Banshee Queen, Sylvanas Windrunner.[3]

In A Good War

Prior to the outbreak of open hostilities between the Alliance and Horde, Nathanos retained his position as Sylvanas's champion. He was largely unaware of the plans Sylvanas and Varok Saurfang drew up for their plan to attack Teldrassil, but did understand his role serving as a distraction and source of misinformation to the Alliance. Under Saurfang's promptings, he staged a mock fight with the orc, fomenting the illusion that the two were at constant odds with one another. This further helped to cement in the Alliance's mind that Saurfang, though he had no love for Sylvanas or Nathanos, was grudgingly taking his troops to Silithus to safeguard the azerite discovered there.

Nathanos accompanied the Horde army into Ashenvale, assisting in the Horde's victories against the night elves. When Malfurion Stormrage blocked their way into Darkshore with a wall of wisps, Nathanos was instrumental in finding a contact that could lead a contingent of soldiers through Felwood and into the northern reaches of Darkshore to strike from behind enemy lines.

He was with both Varok and Sylvanas upon the shores of Darkshore when the Warchief ordered the lighting of the World Tree. Nathanos was just as surprised as Saurfang by the command, showing surprise in one of the few times in his undead life.

Nathanos Blightcaller assisted the Horde army in the defense of the Undercity. He instructed the player's group during the infiltration of Stormwind City's Stockades and joined their escape. After boarding the Zandalari vessel, Nathanos and the player's party were forced to travel to Zandalar.

Nathanos was involved in the following quests:

His death is the objective of the quest

One strategy for the original plaguelands version of Nathanos was to take him down as fast as possible, whilst reducing the aggro on weaker party members. This enabled the group to at least complete the quest, or gain honor under the Honor system for the kill, while all the party was (still) alive.

At least 8 people in a raid group at lower levels were required to defeat him, with a main and off-tank.

The strategy was to focus on Nathanos himself and take him down as fast as possible. He could be taken down in a minute or so, at which point no more skeletons would spawn. The Blighthounds would not do any serious damage until he was dead. Players were advised to deal with them second, and the skeletons third.

There was a need to avoid healing, as 2-4 skeletons would be attracted to the healer. This included direct heals, heal over time spells, Warlock's drain spells, bandages, potions, pet heals, and life stealing enchants. Rather than heal, players were encouraged to run; stop fighting to reduce threat (trinkets etc with Spirit bonuses are useful here) and heal normally; or let the tanks do the healing to attract aggro back.

At level 80 or higher, Blightcaller was easy to solo, especially as a tank. 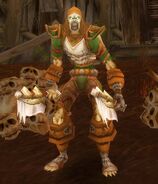 At The Marris Stead, in game

A younger version of Nathanos Marris can be seen in Caverns of Time: Old Hillsbrad Foothills.