WoWWiki
Register
Don't have an account?
Sign In
Advertisement
in: Wrath of the Lich King, Nerubians, Nerubian viziers

Wrath of the Lich King expansion.
From the official

The half-spider, half-humanoid viziers once served as advisors, sorcerers, and seers to the mighty nerubian spiderlords. But in the aftermath of the War of the Spider, the tables turned, and in the vacuum of their collapsed society, the cunning viziers rose to power. Utilizing their sorcery and high intelligence, the viziers have emerged as the rulers of the Nerubians' underground kingdom.

It is rumored that the viziers themselves may serve an unseen emperor, one who is destined to lead the ancient spider-people to a final victory over the Scourge. While many can only speculate as to the existence of this nerubian emperor, some continue to investigate the link believed to exist between the nerubians and the vicious insect race known as the Qiraji.

A Nerubian Vizier in artwork 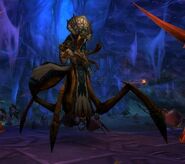 Concept art of a 'Nerubian Elder'.
Community content is available under CC-BY-SA unless otherwise noted.
Advertisement