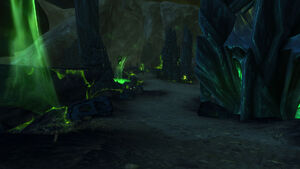 Niskara is a Burning Legion world ruled by

Gorelix the Fleshripper. In his possession is the Artifact Weapon, the

[Maw of the Damned]. After the fight on the Broken Shore, the Knights of the Ebon Blade sent members of their order through the portal on Darkstone Isle in an effort to claim the weapon; when they did not return, adventurers took up the charge instead. Sometime before that, a holy priest adventurer, a draenei warrior, a demon hunter also went through the portal to attempt to secure the sacred crystal staff,

[T'uure, Beacon of the Naaru], from its demon wielder,