Nordrassil is the original World Tree of the night elves, meaning "crown of the heavens" in their language.

The key point of interest on Hyjal is Nordrassil, the World Tree. It stands thousands of feet high, and its vast canopy almost blocks out the sky. Although the tree suffered much damage in the Third War, it is healing itself. It did not flower or grow leaves the year past the war, but the druids hoped that the coming year it would begin to grow again.[1] Guarded by three dragonflights, the World Tree Nordrassil is slowly regrowing.[2] The bones of Archimonde, the great demon lord who led the invasion of Azeroth in the Third War, still hang from the massive tree’s mighty branches. Many speculate that when the tree regrows completely, the night elves will regain their immortality; but that day may never come if they fail to assist the dragons against the continuing threat of the Burning Legion.[2] Even though Nordrassil is healing, it will take another century or two for the World Tree to regain its former glory and power.[3]

The tree was grown from an acorn of the recently lost Mother Tree, G'Hanir, by the great dragon Alexstrasza in the waters of the newly reborn Well of Eternity on the sacred Mount Hyjal.

The tree was also blessed by Ysera to allow the druids entry into the Emerald Dream, since their powers were fueled by nature they could help her protect nature itself within her realm since that is the true purpose of the Emerald Dream. It seems that the druids may have never needed the tree to do this since they can still enter it, even after the tree was damaged enough to remove Nozdormu's blessing. Also, according to War of the Ancients, Malfurion Stormrage was able to enter the Emerald Dream before Nordrassil was created.

But the most important blessing came from Nozdormu; which ensured that so long as the tree existed the night elves would remain immortal. This would ensure that even the most corrupt of night elves would be drawn to protect the tree.

During the Battle of Mount Hyjal, Malfurion Stormrage blew on the Horn of the Ancients to summon forth hundreds of nature spirits to defeat Archimonde, thereby sacrificing the night elves' immortality and causing a devastating shockwave. While the tree's roots appeared to be healing, when last seen, it is clear that its connection to the night elves is gone. Fandral Staghelm led the creation of Teldrassil, which has proven far less powerful and successful than Nordrassil. It appears Nordrassil is now fully grown and under assault by Ragnaros's forces in Mount Hyjal. As before Malfurion Stormrage has returned from the Emerald Dream to render aid.

The elemental Lord Ragnaros has set his forces to attack the tree with the goal to burn and destroy. The forces of Cenarius - along with Malfurion, who has recently returned from the Emerald Dream - are defending the World Tree.[4][5][6]

Near the top of Nordrassil

Nordrassil overhead with roots and lake

Nordrassil as seen in the Caverns of Time

As seen in Lands of Conflict 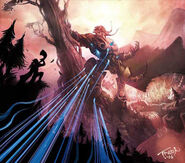