Northrend is the northern, icy continent of the world of Azeroth, and the source of the evil Scourge. It is also the home of Icecrown Citadel, the seat of the malevolent Lich King. The continent is featured in the World of Warcraft expansion, World of Warcraft: Wrath of the Lich King.

Often called "the roof of the world" and sometimes "the crown of Azeroth",[1] Northrend is a frozen wasteland that lies far to the north. As with the other continents, it was once part of the original Kalimdor landmass that was broken apart during the Sundering.[2] The land that became Northrend drifted far from Azeroth's temperate zone, which killed off a large portion of the remaining wildlife.

A particularly hardy breed of insectoid-humanoids, the Aqir, had survived the destruction. After thousands of years of evolution, the Aqir became the Nerubians: a sinister, shadowy race of spider-men. While a few humans and trolls eked out survival in small encampments, their presence was no match for the Nerubian Empire.

Northrend also contains The Dragonblight: an enormous ice plain covered with the bones of thousands of dragons. As they near death, the great beasts fly to Northrend so that they may die with their ancestors. The blue dragonflight, led by the enigmatic Malygos, watches over the Dragonblight to ensure that the remains are undisturbed. The blue dragons were successful in their task for many thousands of years, until the coming of the Lich King…

The coming of the Lich King

After Ner'zhul the shaman was captured and tortured by Kil'jaeden, the demonlord transformed the ancient Orc into a dark being of immense power. Now called the Lich King, Ner'zhul was imprisoned within a block of ice and cast back into Azeroth. Ner'zhul's prison landed at the base of the mighty Icecrown Glacier, by far the largest glacier in Azeroth. From this secret location, the Lich King used his telepathic powers to enslave many of the native life forms, including Ice Trolls and Wendigo. With these servants, Ner'zhul created a small army for himself. The Nerubians, aware of the Lich King's threat to themselves and the world at large, launched an attack on Ner'zhul's forces. Thus began the War of the Spider.

After ten long years of war, the nerubians were eventually defeated by the Lich King's endless supply of undead warriors and aid from the Legion's nathrezim. Most of the Nerubians were slain and reanimated as soldiers in the Undead army, while those who remained alive continued a guerrilla war against the lord of the dead. Satisfied that Northrend was his, Ner'zhul began consolidating his forces for the corruption of Lordaeron. To this end, the Scourge stole many sets of remains from the Dragonblight, which were then reborn as lethal Frost Wyrms.

By the end of the Third War, Northrend had seen the corruption of Prince Arthas, who had followed the nathrezim Mal'Ganis to the cold north in an attempt to stop the Scourge, as well as an invasion attempt by Illidan's Naga and blood elf forces, who had hoped to destroy Icecrown and the Lich King. This invasion was thwarted by Arthas and Anub'arak however, and Ner'zhul successfully merged with Arthas to free the Lich King from the Frozen Throne. The Lich King now holds complete domination over Northrend, and the living dare not tread on the frozen continent—especially after a disastrous invasion attempt of the Scarlet Crusade which ended in the expeditionary force being decimated. Even though the Crusaders reached as far as Icecrown Glacier, the heavy losses suffered from this defeat marked an end to the counter offensive and forced the Crusade into a defensive stance, consolidating their powers in the Plaguelands. Scattered remains of Barean Westwind's fleet are likely to be found amongst the Frozen Coast, the skeletal shipwrecks a warning to any vessel navigating too close to the shores of Northrend.

Main article: World of Warcraft: Wrath of the Lich King

Northrend is the setting of the second expansion.

In terms of size, the Northrend expansion is similar in scope to the Burning Crusade expansion: Northrend has been shown to contain ten zone-like areas, compared with the seven zones of Outland plus four zones of draenei and blood elf starting areas featured in Burning Crusade.

As for the sizes of the zones themselves, a few (especially the Borean Tundra and Dragonblight) are huge, making them similar to the larger-than-average zones in Outland. At the same time, however, Northrend also include a few rather small zones (namely Sholazar Basin and Wintergrasp). Northrend is bigger than Outland by a couple of zones, and some of the zones themselves are larger than Outland's largest zones.[3]

Unlike Outland, there is no minimum-level requirement to enter Northrend.[4]

Questions have been raised about the continuity of the Wrath of the Lich King storyline following the Cataclysm, and blue-poster Bornakk has addressed this issue:

You have to consider the changes with some form of leniency, while technically you could say that if the story progresses then we need to remove a bunch of the content from Outland and Northrend as those are over - but for numerous reasons, you can probably see why that would be a bad idea. This is the same type of thing that happens by just having a persistent world, just because one quest was completed where something was killed doesn't mean it vanishes from your sight forever. While a level 80 doesn't need to return to the locations of Outland and Northrend and can focus on the new stories - a new character hasn't helped defeat the villains in those areas so they still need to answer the call and fight them off (or in the terms people are tossing around, they need to level). [1]

Northrend is mostly an ice and snow covered zone, but some regions, either by a peculiarity of location are somewhat temperate (Grizzly Hills primarily, but Crystalsong Forest and parts of Howling Fjord are milder). The strange exception is Sholazar Basin which seems similar to Un'Goro Crater in Kalimdor, if not quite as swampy.

Wrath of the Lich King zones and recommended levels:[6] 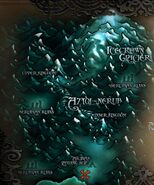 Northrend in The Frozen Throne.

Initial planned layout of zones in Northrend as shown at Blizzcon '07.[7]

Fan concept of the classical map of Northrend. 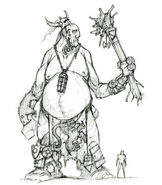 concept art of a giant.