Onyxia is the current broodmother of the black dragonflight on Azeroth. After carefully calculating her plans for many years, she entered into a pact with her elder brother, Nefarian, to take over for their missing father and gain control of the entire flight. To this end, she has begun manipulating many mortals and dragons alike to her own ends and wields considerable political power over many groups.[1] (MG 164)

Long ago, Onyxia drove the Stonemaul ogres from the caves in Dragonmurk, not with any specific ill will, but merely for a place to raise her numerous children, who would then leave to infest the Wyrmbog. She and her children became known for terrorizing any travelers who strayed too close to her home.

Since Deathwing's departure, his eldest children have risen to lead their brethren and recoup their failing numbers. Deathwing's eldest son, the malicious and cunning Nefarian, has claimed the burning fortress of Blackrock Spire as his aerie. There, aided by his loyal dragonspawn, he subverted the remaining Blackrock Orcs and ensnared the black dragons not already under his control.

One of Nefarian's mightiest supporters is his younger sister, Onyxia. A clever, highly intelligent dragon, she delights in corrupting the mortal races by meddling in their political affairs. To this end, she takes on various humanoid forms and uses her charm and power to influence delicate matters between the different races. Onyxia has even assumed an alias once used by her father: the title of the royal House Prestor.

Though Onyxia is relatively small for a black dragon of her age, she shares the same powers and abilities as the rest of her terrible flight. Her searing breath weapon can melt both stone and iron. Her physical attacks, whether bites, scrapes or tail lashes, are lightning quick and nearly unstoppable. When cornered, Onyxia is fond of taking flight and blasting her troublesome prey from above.

Though Onyxia has been sighted traveling to and from Blackrock Mountain, her main lair is located in a fiery cave below the Dragonmurk, a dismal swamp located within Dustwallow Marsh. She is guarded there by her kin, the remaining members of the insidious black dragonflight. There also her brood of new eggs is hidden, awaiting maturation. Should anyone ever threaten Onyxia within her lair — within distance of her precious eggs — her wrath would be terrible beyond comprehension.

Onyxia aided her brother, Nefarian, with the orchestrations of their human personas, in order to work toward replenishing the black dragonflight. The heroes of the world have bravely faced these challenges, struggling to ensure the continued survival of their races.[2] (BCMan 6)

For a time, Onyxia masqueraded as one of the highest officials in Stormwind, preventing the people there from sending much-needed aid to the areas near the Burning Steppes (where her brother has great power and influence). Her own lair lay in Dustwallow Marsh on Kalimdor, and she considered it a safe haven were her true identity to be discovered in Stormwind.

Ultimately, she was unmasked by Marshal Windsor with the help of Varian Wrynn, Broll Bearmantle, Valeera Sanguinar, and Thargas Anvilmar. Taking Anduin Wrynn captive, she fled back to the safety of her lair with Varian and his entourage in pursuit. Varian, Broll, Valeera, Thargas, and Jaina Proudmoore descended into the depths of her lair to rescue Anduin and bring her to justice. In the end she was slain by Varian, and her head taken back to Stormwind to be hung from the gates.

Onyxia returned in the World of Warcraft: Cataclysm expansion. Her head is retaken by her father, Deathwing, and she is resurrected as undead by her brother, Nefarian, so she now appears in Blackwing Descent. She helps her brother in the fight against the heroes. It seems that the resurrection of Onyxia is not as good as her brother, since her body is very unstable.

Onyxia's name is derived from the word "onyx", a semi-precious stone, opaque and completely black. It is often used to describe something that is extremely black and dark. 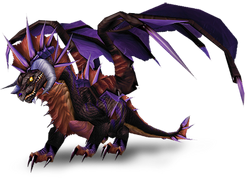 Onyxia initiates combat using her breath weapon and then moves directly into melee, preferably targeting soft targets such as spellcasters. If given a chance to prepare before battle, she uses defensive spells to augment her fighting ability. When she is damaged too much, Onyxia takes to the air. If she is still sustaining a great deal of damage in the air, she sticks to spells, to make sure she can retreat if badly wounded. If heavily injured she either retreats (if in open air) or descends to the ground to reenter melee (if inside her lair). She attempts to land on her enemies and crush them as she comes down to the ground. When she reaches the ground, she immediately uses Deep Breath against the largest group of opponents within range. At this point, she fights to the death if necessary, retreating only if a chance presents itself. If engaged while in human form, she fights using spells unless her attackers clearly know she is a dragon; if her enemies know her identity, she tries to retreat to her lair.[1] (MG 164)

Onyxia's human alias is Lady Katrana Prestor, the woman who used to stand immediately to the right of the boy king, Anduin Wrynn. Her exact purpose at court was unclear, but it was probably to undermine the state of affairs in Stormwind. Onyxia controlled Highlord Bolvar Fordragon through the use of the Drakefire Amulet. It is probable that Onyxia may have played a part in refusing to pay the Stonemasons guild for the rebuilding of Stormwind. Then, using her black dragonflight and corrupt Stormwind nobles, she formed an alliance with the Defias Brotherhood and played a part in kidnapping the King of Stormwind (giving her more control of the kingdom, and preventing a possible Horde/Alliance negotiation). She may also have used the kidnapping to convince Stormwind's nobles (particularly Bolvar) to not send troops to Westfall, Lakeshire, and Darkshire, in an attempt to increase the strength of the Brotherhood and the Blackrock clan in those regions, which are both rumored to be allied to the black dragonflight, and cause chaos throughout the human lands. This is a tip of the hat to her father Deathwing, who wore the form of Lord Daval Prestor during the events that led to the freeing of Alexstrasza.

She is rumored to have significant influence over the following organizations, manipulating them against each other to further her plans and strengthen the black dragonflight:

Other Allies by extension whom she has influence over

In Stormwind event as Katrana Prestor 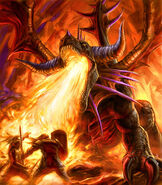 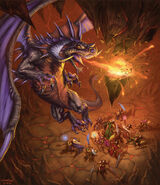 Onyxia Resurrected as an undead. She will be featured in Cataclysm

Onyxia in all different apprences and ages. Fan art by Assey Westfall 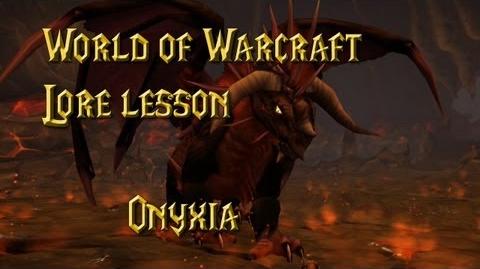 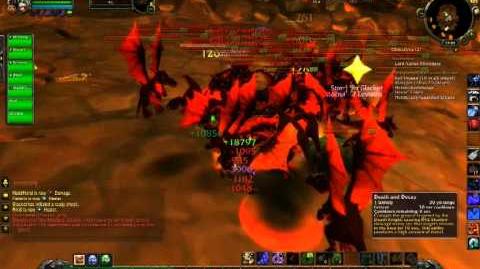