This article is about the general class description. For related articles, see Category:Paladins. For the Warcraft III hero unit, see Paladin (Warcraft III).

The paladin is a hybrid class with the ability to play all three major roles, including healing, tanking and DPS. They have auras, blessings and seals that provide useful buffs for other players while wearing plate armor to heavily mitigate damage and strong defensive abilities. Paladins are considered holy knights[1] or in the case of blood elves, blood knights. Tauren paladins call themselves Sunwalkers to emphasize their relationship with the sun, specifically An'she.

Paladins begin the game able to wear plate. Paladins can use a shield. Paladins use melee weapons, including one- and two-handed axes, maces and swords, as well as polearms.

Paladins are exceptional tanks, excelling at pulling and holding the attention of multiple mobs simultaneously through the use of reactive threat abilities such as Consecration.

The class also has some of the most mana-efficient, low-threat healing spells in the game, allowing a paladin to easily fill the position of a main tank's healer in a party or raid environment. Their healing efficiency makes them great endurance and battle healers, though paladins lack Area of Effect healing abilities. However, with the inclusion of Eternal Flame, they finally have a Heal over time ability.

The paladin has several abilities designed specifically for use against undead and demonic targets, including Exorcism, Holy Wrath and Turn Evil. Note that undead in this case does not include Forsaken players, who are considered Humanoids for reasons of fairness and balance.

In PvP, paladins are infamous for outlasting opponents and being able to adapt to a variety of situations. With plate armor, a shield, the ability to heal themselves and allies, along with a nearly complete invulnerability every few minutes, they are a hard target to take down. Paladins are also capable of doing a surprising amount of burst damage, and stuns and similar abilities provide plenty of utility. Paladins make great support characters, buffing and healing teammates while being able to survive the enemy's attention and contribute a respectable, if not exceptional, amount of damage, depending on the spec (and patch, like everything else).

However, these "Warriors of the Light" are not indestructible, and are particularly vulnerable to silence and interrupt effects, due to the class's reliance on a single school of magic (Holy). This also means dispel effects are powerful deterrents.

While paladins have strong advantages, mastery of the class is also an arduous exercise in multitasking and attention to detail. Thanks to their hybrid role, inexperienced players may find them hard to balance as a whole.

Paladins are virtuous defenders of the weak, and tireless, unfaltering enemies of the undead. Mixing elements of the warrior and the clerics of the Holy Light, the paladin is a tough melee fighter.

The paladin is a "warrior of the Holy Light". They uphold all that is good and true in the world and revile all that is evil and sinister, especially undead and the Burning Legion. They offer succor to the beleaguered and smite their enemies with holy fervor. They are particularly potent against undead, as these creatures threaten the goodly races and the Holy Light burns them terribly. The presence of any evil is reprehensible to paladins, but they focus their efforts on destroying undead and demons.

These warriors uphold the tenets of the Holy Light and defend their factions from the predations of any threat. Found in almost every corner of Azeroth fighting the forces of evil and barbarism, these stalwart warriors of faith ceaselessly uphold their vigil against demonic forces from beyond the Dark Portal. Paladins are the embodiment of good and selfless dedication to the protection of their peoples. They help the innocent and punish the wicked. As such, paladins are generally of good alignment.[2]

During the Second War, some paladins' eyes glowed with inner power of the Light, such as the paladin Turalyon. This is not the case for all paladins, though it occurs in-game with certain paladin armor sets.Template:Fac

The paladin’s code requires that they respect legitimate authority, act with honor, help those in need, and punish those who harm or threaten innocents. While they may adventure with others from different organizations, they will never knowingly associate with evil persons, nor continue an association with someone who consistently offends their moral code. Paladins may accept only henchmen, followers, or cohorts whose intentions are good.[3][4] What they deem "moral" may vary, however. As long as a paladin believes in her/himself and that their endgoal is just - one remains a paladin.[citation needed]

Paladins don't always have to work within good or neutral organizations, as seen by the Scarlet Crusade and others; however, they do have to believe they are working for good organizations or have faith that their cause is good and just. Paladins can be evil (as illustrated by Renault Mograine and Arthas, before he took up Frostmourne), but as long as they believe their cause to be just, the Light will continue to serve them. [5]

Archbishop Alonsus Faol perceived that the pious Clerics of Northshire, who suffered such terrible attrition in the First War, were ill-suited for the dangers of combat. Along with many of the surviving Clerics of Northshire, he sought those of only the greatest virtue among the knighthood of Lordaeron and tutored them in the ways of magic. Led by Uther the Lightbringer, it rested upon these paladins — christened the Knights of the Silver Hand — to heal the wounds sustained in combat and to restore faith in the promise of freedom from orcish tyranny.[6]

The holy paladins led the battle against the orcs and helped save the lands of Lordaeron from ruin. Though 15 years had passed since the end of the Second War, the paladins worked selflessly to protect humanity from the gnawing jaws of evil. Empowered by the Light, these mighty warriors brandished both their warhammers and holy fire in the battle against all those who would trample the weak and innocent.

The Knights of the Silver Hand was at its height until the time of the Plague. As paladins were immune to the Plague, many members of the Order survived the initial push of the Scourge. The Order of the Silver Hand was disbanded by prince Arthas Menethil when Uther refused to aid in the purging of Stratholme. Later, after Arthas was seduced by the power of the Lich King, he killed many paladins upon his return from Northrend, including Uther, leaving only a scattered few.

Following the invasion of the Scourge, many of the order's paladins joined a zealous group of followers of the Light known as the Scarlet Crusade. These paladins became fanatical in their ambition to destroy the Scourge, to the point that those not wearing their colors are deemed corrupted. Others decided to join the Argent Dawn. Some paladins also turned from the Light and joined Arthas Menethil as death knights.

Others fled south to the Kingdom of Stormwind. The paladin order, still referring to themselves as the Order of the Silver Hand, thrived under new leadership at the Cathedral of Light in Stormwind City. Over time, followers of the Holy Light spread their philosophy to the dwarves of Ironforge, who soon adopted the tenets of the order as well. Though decimated, the Knights of the Silver Hand eventually began to recover.[7]

In a World of Warcraft questline, Tirion Fordring vows to restore the original order, which later merges with the Argent Dawn to form the Argent Crusade.

The paladin class can be played by the following races:

Blood elf paladins belong to the Order of Blood Knights, while human and dwarven paladins are usually from the Knights of the Silver Hand. Currently, draenei paladins are members of an organization called the Hand of Argus. Draenei paladins receive an elekk similar to how tauren receive a modified kodo.

As of the Cataclysm expansion, Tauren are the second race of the Horde to be able to take on the role of paladin.[8] Tauren paladins are called Sunwalkers. They receive a kodo mount.

The one who is believed to be the first tauren paladin is located in-game on The Elder Rise in Thunder Bluff, named Aponi Brightmane. She has a conversation with Tahu Sagewind about drawing powers from the sun as the druids can draw power from the moon. 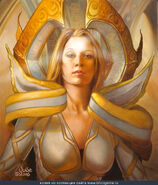 Note: Level 20 mounts require Apprentice Riding (75) (given automatically at level 20) and level 40 require Journeyman (150) (need to train) before trainers will offer them.

Paladins are one of the few classes that can perform any of the three major functions required in group or raid play, depending on their specialization.

Through the protection specialization paladins gain an increased ability to tank enemies. Paladins are especially well-known for their ability to tank many enemies at once with rapid threat production. Paladin tanking was once largely reliant on reflective damage, but can now effectively generate multi-target threat. Strong stamina scaling and simple and very high threat generation make paladins perhaps the best tanks in the game.

Through the retribution specialization paladins are able to significantly increase their damage output while also bringing a large amount of unique raid utility.

Through the holy specialization paladins are able to empower their healing even further. The holy specialization's most important talent, Beacon of Light, allows a paladin's direct heals to be mirrored to the affected friendly target. Holy Paladins are widely regarded as the strongest tank healers in the game due to the high output of Holy Light in combination with Beacon of Light.

Ret Paladin.com Everything to know about Retribution paladins

Retribution Paladins A Site for the Casual Hardcore Ret Paladin!