Edit this page
watch 01:58
'World of Warcraft' - Patch 1.11 Shadow of the Necropolis
Do you like this video?
Play Sound

“Shadow of the Necropolis” 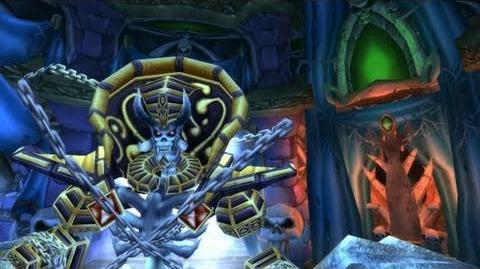 Shadow of the Necropolis

Floating above the Plaguelands, the necropolis known as Naxxramas serves as the seat of one of the Lich King's most powerful officers, the dreaded lich Kel'Thuzad. Horrors of the past and new terrors yet to be unleashed are gathering inside the necropolis as the Lich King's servants prepare their assault. The Scourge marches again...

Naxxramas is the new 40-man raid dungeon that will present even the most experienced and powerful players with an epic challenge.

Shadow of the Necropolis transcript

Kel'Thuzad says: I was cast out by my comrades, exiled. Forced to wander the Frozen Wastes. But I was not alone, not entirely. The voice, now my only companion guided me to my destination, strange, nightmarish creatures awaited me at the entrance, I felt my blood run cold, as cold as Icecrown itself. Inside I bore witness to horrific acts, demonstrations of power. Power that could be mine for the asking. Terrified I ran, but did not get far, all too soon my choice was made. Too late did I realize that such power does not come without a price. Aaaargh! Now the world will pay a far greater toll for I have returned. I am Kel'Thuzad your curiosity will be the death of you.

This list is not guaranteed to be accurate or comprehensive.