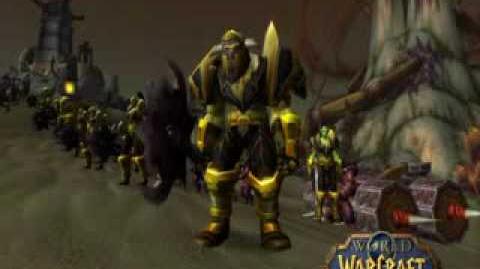 During the public test of Ahn'Qiraj, the world event to open the gates will be accelerated to allow testing of the dungeon content. (Yes, the actual release notes included this out-of-date comment. Verified)

Players will now be able to buy and sell goods with greater effectiveness using the Linked Auction House system. Auction Houses in Orgrimmar, Undercity, and Thunder Bluff will now share the same pool of Horde player-created auctions, and Alliance players will find the same to be true when visiting Ironforge, Stormwind City, and Darnassus Auction Houses. This system has been expanded to support the neutral Auction Houses as well. Tanaris, Everlook, and Booty Bay will all be linked for players of both factions to access. In addition, the "Looking for Group" and "Trade" channels have been unified among the corresponding cities, meaning, for example, that you can trade your goods or look for groups in Ironforge while in Stormwind.

Players will be able to enter multiple battleground queues. No longer must you make the hard decision of which queue to join -- when queued for all three, you can join the first one available or hold out for that particular battleground which you've really got your heart set on. Should a queue open while you are already in a battleground, you may switch to the new battle or remain in the current on.

Tailors now can make soul bags to hold soul shards. The smallest is a 20-slot bag, the recipe for which can be purchased in Gadgetzan. The recipe for a 24-slot bag can be found in Scholomance, and one for an even larger bag can be found in Molten Core. In the main UI, these soul bags will display how many shards they contain. So long as the soul bags have room, any soul shards a warlock creates will automatically go into the bag. The counter on the bag will max out at the number of bag slots even if you have more soul shards in your inventory.

The raid-lockout system has undergone a significant change. The new system will have all instances reset at a certain server time, regardless of when you were actually saved to the instance. The reset schedule is as follows:

All resets will occur during off-hours, when the least amount of raids are active.

The minimum supported Mac OS X revision for WoW will be changed in a post-1.9.0 patch, from 10.3.5 to 10.3.9. If you are running 10.3.5 - 10.3.8 and need to get the free update, you can use Software Update or you can click here for the direct download. This change will make it easier for us to release future updates to the game, for example to support upcoming Mac models based on Intel processors.