Peasants are trained from the hard-working and stout-hearted citizens that live in the numerous kingdoms of Lordaeron. By mining Gold and harvesting Lumber to meet the ever-increasing needs of the fighting force which must push back the unrelenting Horde, they are the backbone of the Alliance. Trained not only in the construction and maintenance of the myriad buildings found in every community, but also those necessary to wage war, they take great pride in the invaluable service they provide. Roused by the tales of the Orcish atrocities in Azeroth, these Peasants have learned to use both pick and axe for their own defenses if threatened.

Peasants cannot be upgraded but they can be converted to Militia.

Peasants can repair Buildings and Mechanical Units automatically when Repair is enabled. Repairing costs Gold and Lumber. If you do not have enough Gold or Lumber you will not be able to repair.

Mines gold from gold mines and harvests lumber from trees.

Return the carried resources to the nearest town hall.

Brings up a list of the available buildings that you may choose to construct.

Run to the nearest Town Hall to arm the Peasant, converting him into a Militiaman.

Note: Although the description of the manual and Battle.net are very similar, they are told with different wording.

Peasants are the hard-working and stouthearted citizens of Lordaeron. They serve as the backbone of the Alliance by mining the gold and harvesting lumber necessary to build up Lordaeron's military defense forces. Roused by the tales of the orcs' atrocities during the Second War, the peasants have learned to use both pick and axe to defend their communities if threatened. 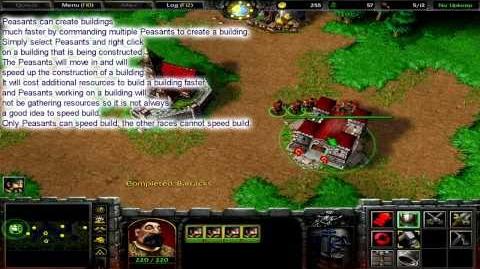