Professor Putricide is a boss in the Plagueworks wing of the Icecrown Citadel raid. It requires high DPS and a lot of movement.

This boss is available since January 5, 2010 on US servers and January 6 on EU servers.

Two tanks are required, one of them drives the Abomination during Phases 1 and 2. In 25 player, a third tank is recommended (Phase 3 only). The encounter becomes easier with more DPS so no more than 2/5 (10/25 player) healers is fine. Putricide enrages 10 minutes after the pull.

In phase 3, the Abomination disperses, so the tank inside the Abomination gets free and must help tank Putricide, because slime pools start to accumulate and eventually kill the raid (soft enrage).

This phase is all about add control. Alternately, a green and an orange add spawn from the green or orange tank respectively on each side of the room. It's essential to kill each add before the next one spawns. Putricide should be nuked only while no add is up. Since Putricide uses no dangerous AoE abilities, it's safe for the whole raid to stand close to him.

Initially, Putricide is tanked next to the Orange tank on the left side of the room. Not long after the pull, Putricide performs an "Unstable Experiment," which spawns a Volatile Ooze (green add) next to the green tank on the right side of the room. Ranged DPS should switch to it immediately and melee DPS should switch as soon as it is clear who it is targetting. The Volatile Ooze targets and roots a random player and moves towards its target; the Abomination pilot needs to snare it with Regurgitated Ooze. Upon reaching its target, the ooze explodes for 175,000 damage which is split between all players standing on top of the target. The explosion also knocks all affected players back a few yards. After the explosion, the Ooze acquires a new target and repeats the process. Positioning players in a group next to a wall can keep the explosions from knocking the characters too far apart.

After the Ooze is dead, Putricide and the whole raid should move next to the Green tank. The next Unstable Experiment spawns a Gas Cloud (orange add) next to the orange tank. The Gas Cloud follows a random player and applies Gaseous Bloat, a dot which requires a lot of healing. Gaseous Bloat starts with numerous stacks that decrease over time. Should the Gas Cloud reach its target while stacks still remain, the whole raid takes a large amount of damage, usually leading to a wipe. The target must kite the cloud around the room while everyone else kills it. The abomination pilot should also snare it. When the Gas Cloud spawns, ranged DPS should immediately begin nuking it down, while melee DPS should wait until the Gas Cloud's target is.

After this, the raid and Putricide move back to the Orange tank. The adds spawn alternately in a predictable manner.

It's highly desirable to have no add up at the start of Phase 2. For this reason it's a good idea to stop DPS at about 82% and finish off the existing add before pushing him into Phase 2 (in well behaved raids this should be automatic because nobody should damage the professor while an add is up anyways).

Putricide casts Tear Gas, which stuns the raid for 10 seconds during the phase change. Rogues can Vanish and Mages can use Invisibility before Putricide finishes casting. This allows them some extra DPS time. The fight remains basically the same, but Putricide gain two additional abilities: Choking Gas Bomb and Malleable Goo.

The Choking Gas Bombs are two flasks which he drops on the ground close to himself. They form an orange cloud on the floor and explode after 20 seconds, killing players within in a 10 yard radius. When he drops them, everybody must move away from the flasks.

Malleable Goo looks like a bouncing green slime ball. Putricide randomly targets and tosses 1/2 (10/25 player) goo balls to ranged targets. On impact each causes 20,000 AoE damage and slows attack/cast speeds by 200%. All players must move away from the impact points of the green bouncing balls.

Just like at the end of Phase 1, stopping DPS a few percentages before he goes into phase 3 to ensure that no adds are up is desirable.

Professor Putricide casts tear gas again and phases. As before Vanish and Invisibility allow extra DPS time. With good timing and a little luck, a Shaman can drop a [Fire Elemental Totem] that's not affected by the Tear Gas as well. This can also be used between Phase 1 and 2, but is more useful for Phase 3.

During Phase 3, adds stop spawning, but adds that are up do remain. Use all DPS cooldowns at the start of this phase. Malleable Goo, Choking Gas Bomb, and Slime Pools continue. The Abomination buff is removed and the person inside returns to normal form. This means that the slime pools accumulate and start growing. Phase 3 is a DPS race, Putricide must be killed in short order (about 80/120 seconds in 10/25 player).

Any remaining add must be killed immediately. Putricide stacks a debuff on his current tank every 10 seconds (Mutated Plague), which has a one-minute expiration timer. The debuff deals AoE damage to the whole raid. If it expires, is removed or somebody dies from it, Putricide gains a massive amount of health (300.000 health for each stack that the person had in 10 man). With two tanks, Tank #1 should tank it up to 2 stacks, then Tank #2 should tank it up to 2 stacks. After that, the tanks should taunt off each other per stack. With three tanks, each tank should initially get 2 stacks, and then to four stacks.

Putricide also stacks a buff on himself called Mutated Strength, causing him to do more damage over time.

In 25-player: In Phase 3, Mutated Plague triples in damage every stack, therefore three tanks are recommended.

This is a condensed, easy to read version of the above. It describes the basics of the fight generally for normal modes in limited depth.

Phase 1: Ooze pools should be eaten by the Abomination pilot to gain resources and remove hazards. Alternating, an add spawns from the green and orange tanks. The abomination pilot must snare adds using 'Regurgitate ooze'. DPS must priority kill the adds. Ranged must stack on the target of the green add, while the orange add must be kited by its target. Only when no adds are up should you DPS Putricide. Stop near 80% HP to kill oozes, then proceed into Phase 2 with no adds up.

Phase 2: Continue Phase 1's add management. Choking Gas Bombs and Malleable Goo are dropped by/thrown at the raid. They should be dodged. Burn adds that remain before 35% and Phase 3.

To maximize DPS time, Putricide stays near the green ooze spawn point. Ranged stack opposing the oozes, at max range, while spreading out to minimize the malleable goo effect during Phase 2 & 3. With this positioning, melee can switch from the boss to the green add very quickly.

The transition to Phase 2 should occur before the second green slime spawns, in 10 player it's even possible to get Phase 2 before the first orange add spawns. Tank positioning here can make the difference. The first location should be nearby the table until the first puddle of ooze drops. Then the tank can move to the exact point where the ooze spawns at the tip of the arrow closer to the table on Green side. This allows the melee to be on the green ooze,once it is target-able. The ranged can stack on this phase on the opposite end of where the green ooze appears on the circle, allowing for range on Putricide and the Ooze when it comes out.

When the green ooze spawns, ranged can simply stay put on top of each other and nuke it. Melee follows the Ooze towards its target, so when it explodes damage is distributed between everyone. Before the orange ooze spawns, the tank should then have another puddle appear at his feet sometime soon. At this point take him back to position 1 by the table. When the orange ooze spawns everyone should be a safe distance away from it, ranged at max range, melee near the green tank. Ranged immediately switch to it, melee nuke Putricide while waiting until it has picked a target, and then charge in. The targeted player can help by kiting the add towards the melee group first, and then around the room, staying near the green tank if possible.

If Phase 1 was ended with no oozes, there's a solid 20+ seconds to DPS the boss uninterrupted. Phase 2 is identical to Phase 1 except that it requires higher raid awareness. The boss has to be moved when he drops Choking Gas Bombs (orange vials on the ground), and ranged must avoid Malleable Goo at all costs. When using BigWigs or Deadly Boss Mods, it's a good idea to stick to its advice - don't move if the mod doesn't tell you to do so. The two positions that the tank has established should flow perfectly from here on out. Whenever he drops a choking gas bomb, move to the other position. When the green ooze comes out, he should be right on top of it. When the orange ooze comes out, he should be near the table.

This phase should also be ended with no oozes present and little to no slime puddles left.

Follow the lines as guided in the Picture. Otherwise, same as in the above Phase 3.

For the Orange add, ranged picks it up as soon as possible as normal. Melee attacks when it is clear they are not the victim. The kite path is ideally around the Putricide tank and ending near them, so that melee doesn't have far to go to get back to the boss.

The Hudmap addon can help one see the malleable goo, and its true landing spot. Ranged group for phase 2, but not too closely to help avoid puddles forming under a green add victim, and to help prevent a malleable goo landing upon the victim and all of the people trying help share damage. Ranged can step in at the last second to help share the damage. However, the 'share damage' radius is quite small, and if one does not fly through the air as expected, they need to keep moving away from the add, as they may be the next victim.

Most Putricide tanks can help dps the green add, as well as chase it to a ranged victim. Putricide doesn't seem to to hit too hard from behind. Protection warriors can charge the green add while being thrown through the air. This fight penalizes people standing off by themselves.

Overall Professor Putricide's Heroic Mode emphasizes an unforgiving raid environment as both Malleable Goo and Choking Gas cloud MUST be avoided to avoid the dps loss and to avoid putting strain on the healers. This is even moreso in Phase 3 when getting hit by either could spell a wipe, with dps being lost and healers being overtaxed.

In 10-player mode, there are no Variable debuffs, but he still spawns both a Volatile Ooze and a Gas Cloud at the same time instead of casting Tear Gas. 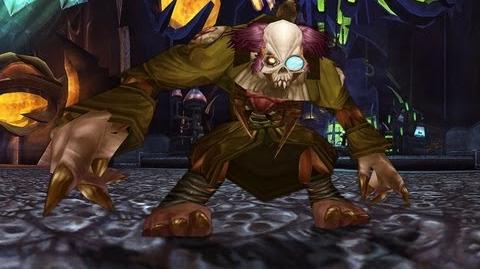 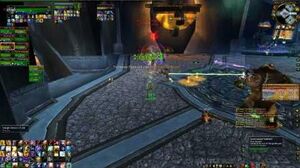 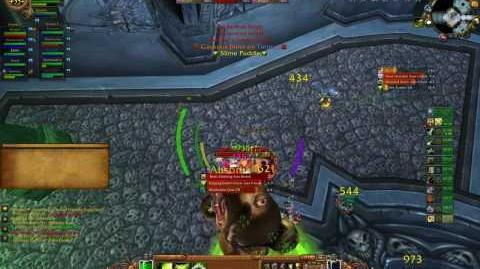 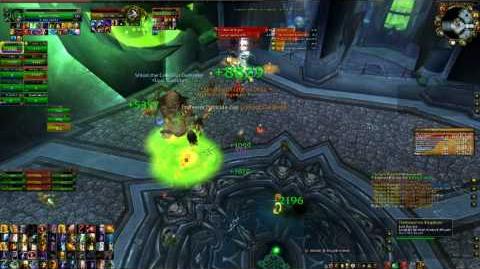 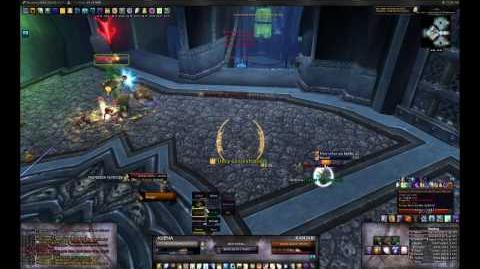 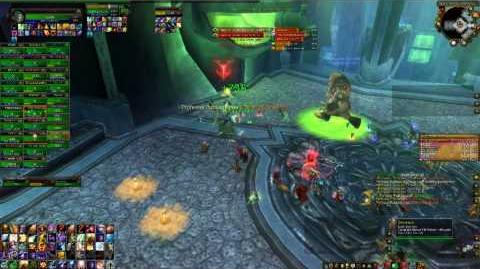 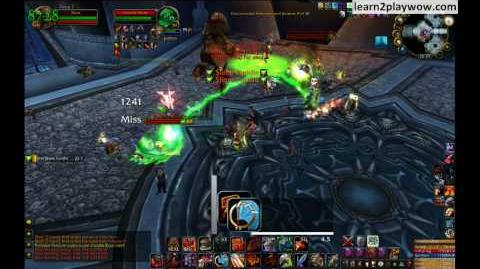 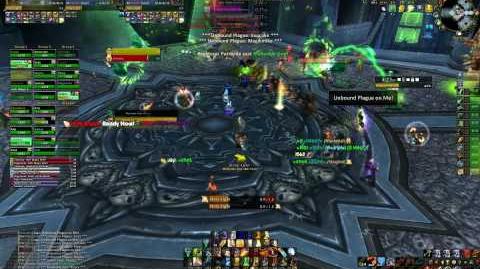 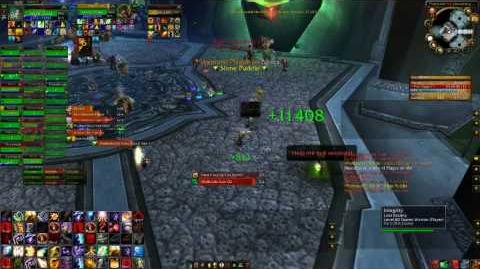 Icecrown Citadel: The Frozen Throne |  Blizzard Entertainment
The Plagueworks contains the most twisted experiments ever produced by the Scourge. In this wing players will face two new forms of abomination in Festergut and Rotface, who currently protect their devious creator, Professor Putricide.

See this subject on the Hearthstone wiki: Professor Putricide