Proto-dragons (also spelled proto dragons or protodragons) are the long-forgotten forbearers of the dragon species living in Northrend.

The proto-dragons are the ancient, semi-sapient progenitors of the dragons seen today. From them, the Titans created the Aspects.[1][2]

Galakrond, a massive proto-dragon,[3] is referred to as the "Father of Dragons," but as Alexstrasza informs Kalecgos, that idea is just a myth that the five Dragon Aspects have allowed to permeate through history. In reality, after conquering Galakrond as proto-dragons, a group of Keepers turn Malygos, Alexstrasza, Nozdormu, Ysera, and Neltharion from proto-dragons into the five Dragon Aspects in order to protect Azeroth from any future threats as they did with Galakrond's cannibalistic madness.[4]

The Vrykul use them as flying mounts in the Howling Fjord and other parts of Northrend, and can be seen doing so in their constant siege of Valgarde. Wild proto-drakes can be seen in areas such as Storm Peaks and Sholazar Basin. Bronze proto-drakes from the Bronze Dragonshrine are used as mounts by the Argent Crusade in Icecrown. The Time-Lost Proto Drake is famous for being extremely hard to catch, a possible reflection on the species. 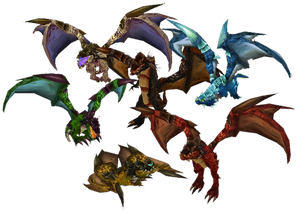 Red proto-dragons
Which appear most abundant throughout Northrend.

Blue proto-dragons
Mostly only found in the Storm Peaks.

Green proto-dragons
Haven't made an appearance, though one can be acquired through the Oracles.

Bronze proto-dragons
Have been seen in Icecrown working alongside their dragon brethren.

Plagued proto-dragons
Plagued blue proto-drakes (presumed), can be found in the Storm Peaks and Icecrown.

Plated proto-dragons
Created from the blue proto-drake Veranus into Razorscale, under control of the Iron army.

Violet proto-dragons
Only appears as a mount won through achievements

As a flying Mount

In World of Warcraft: Wrath of the Lich King, several proto-drake mounts are available as rewards for various achievements, as well as a few that drop from mobs and bosses:

A proto-dragon in Sholazar Basin.

The dragon pens in Utgarde.

Art of the dragon pens.