Quest:An End And A Beginning

An End And A Beginning

Every good story has a beginning and an ending, <name>. While your story is far from over, I'll be damned if it's not already turning into the stuff of legend! No matter what happens to us when this is all over, what you've done at Wintergarde will be a tale told for years to come.

Now, ally, when you are ready I will use the phylactery to coax Thel'zan out of hiding.

Should we somehow succeed, report the victory to High Commander Halford Wyrmbane at Wintergarde Keep in Dragonblight.

Wintergarde is saved because of you, <name>. To think that one <man/woman> could so swiftly turn the tides of battle is hard for most to comprehend; yet here we are - victorious! You have managed to restore the faith of these people and earned the respect of your commanding officers.

Lord Fordragon has returned to Angrathar to prepare our forces for the destruction of the Wrathgate and has requested that you join him! I couldn't recommend a better soldier for the job, <name>.

Before accepting the quest, the 7th Legion Elites say any of the following waiting for the player to show up:

Upon accepting the quest:

Legion Commander Yorik says: Steel yourselves, soldiers. <Name> has provided us us with the final piece of this puzzle. The dread lich, Thel'zan, will soon come out of hiding, only to be rendered powerless against us!
Yorik walks forward and drops 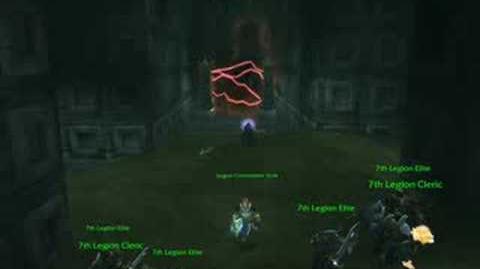