[Borean Smasher], [Axe of Frozen Death], [Staff of the Purposeful Mendicant], [Fury of the Raging Dragon], [Fang of the Desolate Soul] or [Tower of the Infinite Mind]
15

Go to the Temple City of En'kilah and find the teleportation orb beneath the Scourge citadel of Naxxanar. Use it to reach the top and help Thassarian there.

I served Arthas in death, because I had no choice. He had control over my will and my body. The Cult of the Damned serves Arthas in life... willingly.

Now that we know the words of power to enter Naxxanar we can put an end to the cultist blight. Go to En'kilah and look for the teleportation orb beneath the floating citadel.

Work your way up and meet me at the top. Arm yourself with what courage you can, we might not make it out of this alive.

You did well, <name>. I was hoping to leave my sister out of all of this. Thanks to you she is alive and well.

My obligations to my king and my army have been fulfilled. It is clear I'm not welcome among my comrades anymore. I will have to find my own way, fighting no wars but my own and following no orders but my heart's.

Perhaps we shall meet again, <class>. Until then, take this as a token of my gratitude.

Get to the top of Naxxanar by porting up to the lower level, then going upstairs and taking the orb to the top, where Thassarian awaits.

Say "Let's do this, Thassarian. It's now or never." to start the event.

Prince Valanar says: Pitiful... just pitiful.
Valanar and the others all despawn.

General Arlos says What... what happened to me?
General Arlos says: Ugh! My head won't stop spinning...
Leryssa yells: Thassarian, you're alive!
Thassarian says: Leryssa... you... you're all right!
Leryssa says: I thought... I thought you were... dead.
Thassarian says: I cannot return home with you just yet, Leryssa. I am not quite done with the Scourge.
Leryssa says: Don't leave me again! You want to fight for your country, but they don't even want you! They sent you here to die!
Thassarian says: You might be right, sister. My obligations to my land and King have been fulfilled. But there is still something that I owe to myself.
Leryssa says: I know that look in your eye... I'm not going to be able to talk you out of this. If you die on me again...
Thassarian says: Do not worry, Leryssa. I will come back to you when I'm done. Nothing in the world will stop me from coming home to the only family that I have left.

He has 115K health. Note that this event, like many involving the Lich King, has voice accompanying the text. 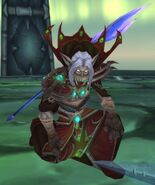 Image of the Lich King

Last Rites (from beta)
Add a image to this gallery