Were you looking for: 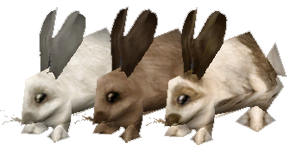 A rabbit is a small, fluffy critter that is a common fixture in almost any wooded area. It is a favorite target of predators. Some rabbits can be bought as Battle pets. The squashed carcasses of these unfortunate animals are often found within the folds of the skin of various thunder lizards around Durotar. Skinners were previously able to skin rabbits and other critters for easy Ruined Leather Scraps and Light Leather for beginner Leatherworkers, but this was removed. The elfin rabbits have been altered by the magic surrounding the night elves, giving them unnaturally long life spans and in some individuals, stranger mutations.

A player can become a Nobelgarden Bunny during Noblegarden. As a Noblegarden Bunny, they can lay Tiny Colored Eggs which is followed by a chime sound.

Talking bunnies are fluffy and are part of Azeroth's fairy tales.[3] Although, this is likely in reference to the critter and not necessarily the bunny race.