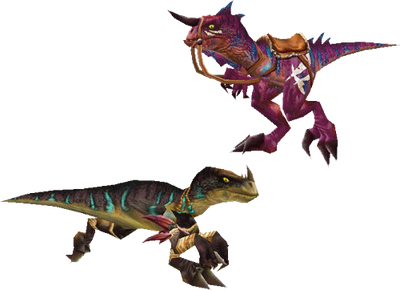 There are several types of creatures called raptors in the Warcraft universe. Those in the game are typically hostile and skinnable.

Raptors are large, aggressive theropods (this means, they stand upright on two large hind legs in a bird-like fashion). Trolls use a variety of raptors as a mount. Raptors are found in Durotar, the Barrens, Wailing Caverns, Wetlands, Arathi Highlands, Un'Goro Crater, Stranglethorn Vale, and Dustwallow Marsh. Raptors seem to be very intelligent for beasts. They wear feathers and beads, and in the Barrens (where the smartest raptors are said to dwell) they have a settlement of mud huts decorated with bone ornaments called Raptor Grounds.

Raptors come in many colors, from green-striped red to yellow-striped turquoise. A raptor’s tail extends straight out, held aloft by an intricate structure of bony supports, thus allowing its weight to be carried entirely by the back legs. Raptors weigh about 600 pounds and use a combination of speed, grasping forearms, large teeth, and hind legs with ripping talons. They hunt by running at prey, leaping, and ripping with their rear talons as they claw and bite. A raptor has a relatively large brain for a dinosaur, and its pack hunts with cunning tactics.[1] (HPG 217)

The savage ferocity of Kalimdor's raptors has enthralled the Darkspear trolls since their arrival. They consider a raptor to be the truest form of a hunter, and as such, the tamed Darkspear Raptor is their mount of choice. A tamed raptor is truly a fearsome beast, as a skilled troll is able to channel the reptilian steed's savagery to suit the rider's will. A tamed raptor is also one of the most auspicious signs of status amongst the trolls; many have died trying to tame these swift and deadly hunter beasts, and to possess one indicates great station.[1]

The raptors of Raptor Ridge once joined forces with Rhonin in the struggle against Sintharia at Grim Batol. 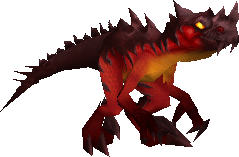 In World of Warcraft: The Burning Crusade, Outland is inhabited by another type of raptor found in the Netherstorm and Blade's Edge Mountains. Their coloration and body shape is quite different from the raptors of Azeroth, as they feature very bright coloration, glowing eyes, and sharp spikes ridging their spine and tail.

Some lizards remarkable akin to the common raptor also have the ability to fly. The most common example of these are the flying mounts used by the blood elves and high elves known as dragonhawks. The physiology of the current dragonhawks known to exist make them seem to be more akin to a snake or dragon instead of a raptor.

Raptors come in a wide variety of bright colors, making them popular to use.

Though hunters can respec their pet raptors into Cunning or Tenacity, they are inherently Ferocity. In addition to the abilities that come standard with all pets ([Growl] and [Avoidance]) and those given to their natural or retrained specialization, all raptors are given the following:

The subspecies below can be tamed by hunters. Troll hunters start with a ravasaur.

Originally introduced in patch 3.2, there are now a total of nine Raptor Mini-Pets. 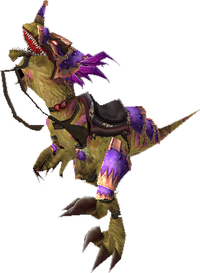 Raptor are sold by Zjolnir located in south Durotar by Sen'jin Village. Samamba, the Sen'jin Quartermaster in Icecrown, also sells two unique Raptors. There are also several rare raptors all over Azeroth.

See this subject on the Hearthstone wiki: Raptor