The ferocity of Kalimdor’s raptors has enthralled the Darkspear trolls ever since their arrival on the Echo Isles years ago. The tribe considers a raptor to be the purest embodiment of the hunter’s essence, and as such, a tamed reptilian is prized as a mount. Skilled Darkspear riders have even been known to channel their raptors’ savagery to suit their will. Possession of these predators is also one of the most auspicious signs of status among trolls; many have died trying to subdue these swift and deadly raptors, and to control one indicates great station.[2]

These mounts give a 60% speed increase on land. You can purchase these mounts from Zjolnir <Raptor Handler> in Sen'jin Village in Durotar so long as your character has riding skill of 75 (obtainable at level 20). If you are playing as any race other than a Troll, you will also need to have Exalted reputation with the Darkspear Trolls.

These mounts give a 100% speed increase on land. You can purchase these mounts from Zjolnir <Raptor Handler> so long as your character has riding skill of 150 (obtainable at level 40), and are restricted similarly to the apprentice mounts above. 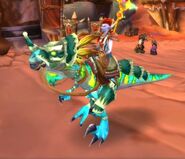 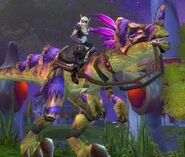 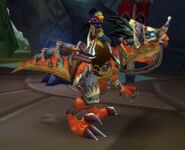 The Black War Raptor is available from

Raider Bork <Mount Quartermaster> in Orgrimmar for 2,000 Honor points. You do not need to have exalted reputation with the Darkspear Trolls to purchase it.

These following Raptors can be purchased from the Argent Tournament. You must have completed

Champion of Sen'jin or be a troll to gain access to this quartermaster. 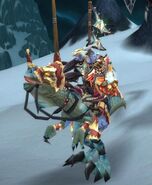 The Swift Razzashi Raptor drops (rarely) from Bloodlord Mandokir in Zul'Gurub. Both Alliance and Horde can acquire this mount.

The Venomhide Ravasaur mount is a reward for completing the quest

[53] They Grow Up So Fast. It was added in Patch 3.2.0 to be a complement to the [Winterspring Frostsaber].

These used the old Raptor mounts graphics, and can be exchanged for the newer variety if desired.