This article is about the hunter pet. For other uses, see Ravager (disambiguation). 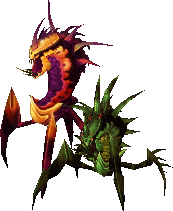 Ravagers are vicious predators who hide behind rocks in Outland and prefer to wait for their prey to come to them. They come in two distinct models, one with more spikes and glowing eyes. They can be found in Hellfire Peninsula, Shadowmoon Valley, and Blade's Edge Mountains.

Though ravagers are not normally native to Azeroth, The Exodar carried some native Outland creatures with it to Azeroth, including ravagers. When The Exodar crashed, it resulted in the unfortunate escape of these fierce beasts into Azuremyst Isle and Bloodmyst Isle, causing a disruption of the native flora and fauna there. 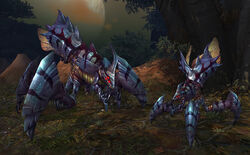 Ravagers hatch as small ravenous larva, but soon disappear into pupae, only to emerge as slender wasps with a swarm mentality and a ferocious sting. Wasps quickly set out to gorge themselves until their wings can no longer support their body weight, after which they undergo a third and final metamorphosis into a vicious four-legged insect, whose distinctive, gurgling click-hiss instills fear in orc and draenei alike. Heroes should beware the fully-grown ravager’s serrated mandibles (capable of shredding armor) and the lacerating spikes ravagers eject from their armored carapaces.

Though hunters can respec their pet ravagers into Ferocity or Tenacity, they are inherently Cunning. In addition to the abilities that come standard with all pets ([Growl] and [Avoidance]) and those given to their natural or retrained specialization, all ravagers are given the following: