Razorscale is an optional boss encounter in Ulduar. Formerly Veranus, Thorim's mount, Ignis fused metal plates to her scales after capture.[1] She is now a plated proto-drake that flies over Razorscale's Aerie, across from the Colossal Forge.

On normal mode, the fight proceeds exactly like the heroic variant, except that only two turrets need to be repaired and fired instead of four.

This boss fight consists of three phases, alternating air and ground phases until 50% damage taken, and then a pure ground phase from 50% to 0%.

Talking to the Expedition Commander will begin the event with Razorscale in her air phase.

As of patch 3.1.1, Razorscale has a ten minute berserk timer across all phases.

The air phase consists of defending the Expedition dwarves while they repair the harpoon turrets. During this phase, the focus should be on defeating adds (Sentinels are priority, Watchers must be CC'd and killed second, Guardians last), and staying out of Devouring Flame. As the turrets get repaired one at a time, they can be clicked to fire a harpoon at Razorscale.

The raid should be split into three groups, one near the far side of the circle opposite the harpoons, and two groups positioned slightly round the circle back towards the harpoons. Each group should engage the spawns from a single pod and destroy them, there is no need for crowd control and AoE can be used. If a sentinel spawns all 3 DPS groups should focus fire this target as it presents the greatest and only tank threat amongst the spawned adds.

Raid healers should be assigned behind the three groups to support heal and heal the players assigned to trigger the harpoons.

The raid should be split into two groups in a sort of 'V' shape at the start, with the vertex in the center of the large circle. Tanks will pick up adds and attempt to kite them back towards everyone else to be AOE'd. Healers and ranged DPS should be back slightly to avoid whirlwinds and chain lightning. Shaman are very useful in interrupting Chain Lightning and Lightning Bolt, which should help kite them together with the rest of the adds (of course, rogues and warriors will be helpful with that as well). In most cases, watchers will automatically begin melee-ing after a single cast; if you can take the damage, then don't waste time dealing with them separately.

In normal mode, there are only 2 Harpoons that become active to bring Razorscale down.There are two main ways of handling the Harpoons. The first way to do this is to activate the first harpoon when its ready, then when the second one is ready, wait until your DPS/Tanks call that most adds are down and to fire the harpoon. This way everyone, tanks and healers (mana permitting) can concentrate on Razorscale and max DPS without having to worry about adds and keeping tanks alive. The easiest way to do this is to assign a ranged DPS to "Harpoon duty" and call out in vent when they are ready, then have a Tank or DPS call out on vent when to fire the second Harpoon. The second way to handle this part is to activate the second harpoon immediately when ready and the adds can be brought in front of Razorscale while the DPS switches to Razorscale when she lands, that way when she does her breath attack to free herself it hits all the adds and mostly kills them. The downside to this method is you have adds up which means healers and Tanks must focus on them and not on Razorscale. It is very important to DPS as much as possible when she is Harpooned to the ground to get her into the second "ground" phase (50% health) before she enrages in the air.

During this phase it is important to ensure that the raid healers keep members of their party above 12,000 health as this prevents losing targets to a single fireball or devouring flame; a double or even triple breath is possible (and common) so healing must be fast and effective (Paladins are ideal in this role due to Holy Shock). Healers' first priority must be to keep themselves alive, however any losses in this fight can be detrimental to the raid's ability to beat the enrage timer.

Razorscale's fireballs and devouring flames will annihilate a group that isn't paying attention. There are no addons that currently track either projectile, so it must be watched closely. To do this, have one or two healers, prior to the fight, look up and target Razorscale and then use /focus. Make sure cast bars and target of target can be seen on the focus (test on a player in the group). During the fight, have the healers, between healing, watch the focus for Razorscale's targets. Each target can only be seen briefly, for less than half a second so they have to be on their toes. If no cast bar is shown, but someone is targeted, it means a fireball will hit them (it can miss). Priests can shield these targets, and others can just pre-heal to get them up immediately after being struck. It's important to keep them healed in case they get targeted multiple times in a row. When Razorscale uses Devouring Flame, a 1 second cast bar will appear, and the target will appear right as it finishes. The person who is targeted should be notified immediately, and that person needs to begin moving (preferably away from others in the raid) or be ready to move immediately. The devouring flame will track the target briefly (if you move, it will move) before striking the ground (you can see a blue ball fall into the location before spreading into flame). If you move early, it's hard to know where it will hit. If you stand in one place, you can position yourself safely and then run when the flames are about to appear.

Devouring Flame always targets the closest ally to Razorscale (i.e. a player or a pet). This makes it possible to have a healer or ranged DPS "tank" the Devouring Flame patches, as the projectile doesn't follow a moving player—it will only go to the spot the player was when fired. This can reduce unpredictable damage considerably. In the first air phase, Razorscale hovers over the central circle. For subsequent air phases, Razorscale's initial position is on the northeast side of the fighting area (look for pets that have yet to come off of Razorscale: they will stand still directly below the boss and also be the first targets for Devouring Flame). Using a harpoon will bring Razorscale back to center, as in the first air phase. Keeping Razorscale targeted or focused can make the use of Devouring Flame obvious (through the cast bar) and the Devouring Flame tank can walk a simple path around the point closest to Razorscale, keeping the flames off other raid members and avoiding most of the damage himself.

Once all four turrets have been repaired and fired, Razorscale will be forced to the ground where she will remain stunned for several seconds. Everyone should immediately move behind her, and DPS should focus on bringing her HP down as much as possible while the tanks hold any remaining adds. After the stun wears off, Razorscale will breath then return to the air and begin the air phase again.

For this phase tanks should converge onto the rear of Razorscale allowing their DPS to be added to that available in this phase, with 5s remaining until the stun wears off the tanks should move with any remaining adds towards the furthest point on the circle and allow full raid AoE damage to be applied to the adds. As new pods appear tanks should move their adds back to their regular tanking positions.

Once Razorscale is brought to 50% health, she will land permanently, at which point she will need to be tanked facing away from the group to avoid breaths. The fight from this point is very simple, she will continue using Devouring Flame, she will do a knock back to everyone within 35 yards, and inflict the Flame Buffet debuff. During this ground phase, the DPS should go all out in order to defeat Razorscale before the Flame Buffet debuffs cause the tank to be one-shotted.

There is another debuff that happens during this fight. In phase 2, when tanking Razorscale, your tanks will get a debuff called "Fused Armor" which adds a slowing effect to the tank. When this debuff hits 5 stacks the tank can't move or use any abilities, including taunt. You need to change tanks when the debuff gets to 2 stacks in order to finish the fight.

Razorscale doesn't say anything herself but the NPCs involved in the fight do.

Razorscale does not have a hard mode, but

Iron Dwarf, Medium Rare (10 player) or the 25 player version are part of the 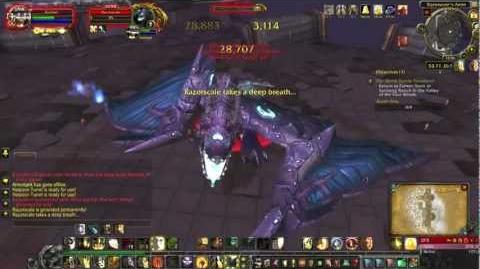 How to Solo Razorscale MoP 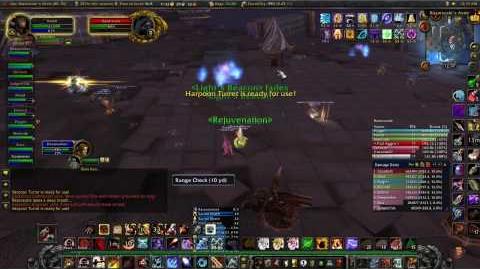 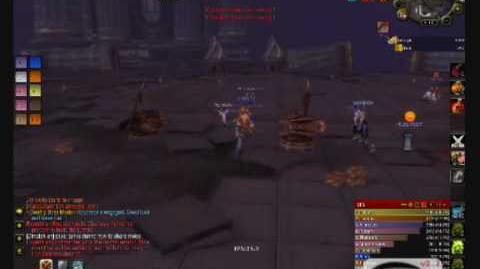 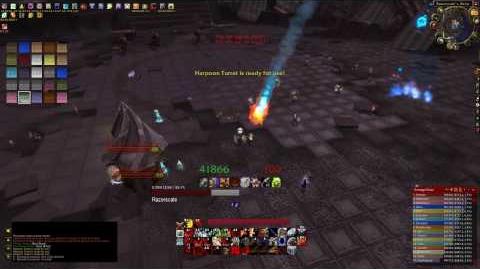 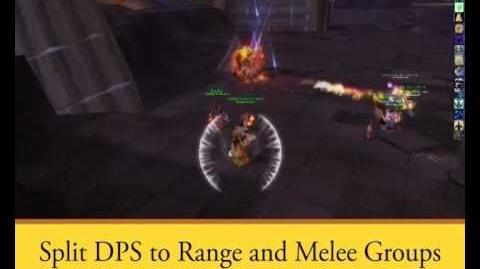 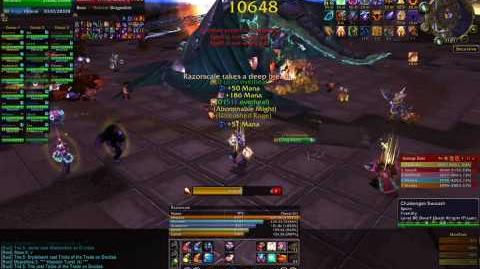