The dragon's scaled hide shimmers in the sun like countless rubies. It's long neck is a graceful arc as its noble, ridged head takes in the surroundings. Its golden eyes gleam with great wisdom.

The term "red dragon" may refer to a member of the species regardless of age, or more specificly in place of "mature" to describe the adult phase of a red dragon's lifecycle, between adolescence and becoming a wyrm. They are 100-500 years old.[1] Red dragons are associated with fire.

Red dragons once ruled as lords over all dragonkind. This nobility is reflected in every aspect of a red dragon, from its proud demeanor to its aura — one that inspires awe. It is as debilitating as the terrifying presence that other dragons possess, except that it overwhelms with a beatific aura.

Red dragons exemplify the serenity of life and nature. Legends hold that the earth is renewed wherever a red dragon walks upon the earth or burns the soil with its flaming breath. Although they use fire to protect and punish, the flames always give way to new life.

The red flight was once charged with the protection of all living things on Azeroth. In time, their vision became clouded. Humanoid races were in an uprising, and some red dragons insisted that they must make war upon them to protect the wilderness. Others believed that the mortal races could be allies to help in bettering the world. This led to a great schism within the red flight that has never been repaired. When their Aspect, Alexstrasza, went missing, the red dragons scattered in order to find her. Deathwing and his black flight took this opportunity to attack the leaderless, scattered red flight. They fought back against the black flight and forced a detente, but doing so caused delays in looking for Alexstrasza. They soon found out that orcs held the Dragonqueen, and even were using the new generations of red dragons in the Second War. Soon, mortals helped free Alexstrasza, and the red flight resumed its ancient charge of defending Azerorth.

Red dragons are honorable and fight on even terms if battling honorable or worthy opponents. They will sacrifice their aerial advantage if they are met fairly on the ground. The red dragon's wrath, however, dispenses with honor when facing those they consider dishonorable — any evil creatures, as well as orcs. Such beings are to be expunged with every instinct and ability that red dragons possess. Red dragons prefer to use flame to entrap enemies and force them to difficult terrain, using their aeial advantage for greater mobility. They prefer to destroy an opposing force's leadership first, ruining its power structure and hopefully setting the younger or less experienced combatants to flight.[2]

A red dragon from Manual of Monsters. 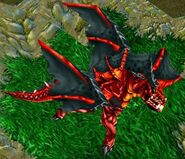 A red dragon from Warcraft III.

The red dragon Vaelastrasz, in World of Warcraft.

"Ruby" and "crimson" is usually associated with the red dragons.