WoWWiki
Register
Don't have an account?
Sign In
Advertisement
in: Removed in Warlords of Draenor, Statements needing citations, Reforging
English

Cataclysm expansion, Reforging allows undesired stats on gear to be exchanged for more useful stats. It allows 40% of a secondary stat (such as critical strike, dodge, haste, hit or parry rating) or spirit to be exchanged for another secondary stat or spirit, and reforging is handled by NPCs known as Arcane Reforgers located in the major cities. The cost of reforging an item is equal to its sale value.[1] Stats can only be exchanged for other stats which are not already on the gear. Earlier in Cataclysm's development, reforging was planned to be an ability of Jewelcrafters, Engineers, Tailors, Blacksmiths and Leatherworkers, who would have been able to create items similar to enchantment scrolls which other characters could use to reforge their gear.[citation needed]

In Patch 4.3, the UI has been changed to give a set of selectable radio buttons to choose what stats to change and how to reforge rather than the previous drop-menus.[2]

Reforging was removed in Warlords of Draenor with the release of patch 6.0.

Arcane Reforgers were located in every faction capital near the Transmogrifier, and reforged any item with Item Level 200 or higher. 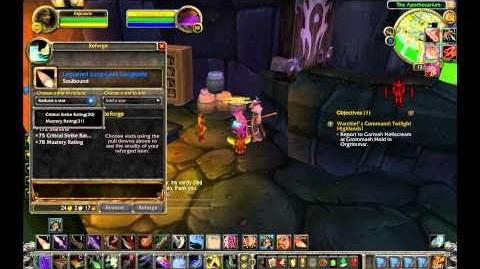