Former Leader of the Kirin Tor

Rhonin (also know as Ronin) was an adventurer and the former leader of the Kirin Tor. A powerful human mage, he was also known to be skilled with the sword.[2][3] Rhonin was instrumental in breaking the power of the orcs at the end of the Second War by freeing the Dragonqueen Alexstrasza from her imprisonment by Nekros Skullcrusher, an orc warlock and leader of the Dragonmaw Clan who used the Demon Soul to keep her prisoner. He later traveled back to the War of the Ancients in order to heal a rift in time.

As the war in Northrend intensified, Rhonin came to the forefront, leading the Kirin Tor from the Violet Citadel in the rebuilt city of Dalaran. He announced the defeat of Algalon the Observer and was involved in the final quests after defeating him.

During the attack on Theramore Isle, Rhonin sacrificed himself in order to confine the explosion of a mana bomb created by the Horde that destroyed Theramore Isle. He also saved Jaina Proudmoore, who then succeeded him as leader of the Kirin Tor just as he had foreseen beforehand.[4]

Rhonin was once a promising mage of the Kirin Tor until a disastrous mission involving the reckless use of magic cost the lives of all his comrades — whilst Rhonin was casting a spell, others in his group got in the path of his attack. He was cast into probation until the opportunity for penance arose with a dangerous mission into Khaz Modan. [[Krasus]—a Kirin Tor senior mage and one of The Six—convinced Rhonin to take up this dangerous mission to regain his honor and respect of the Kirin Tor. He was assisted in this mission by the high elven ranger Vereesa Windrunner, the warrior dwarf Falstad Dragonreaver, and the dragon-mage Krasus (who was the instigator of this mission).

He was also assisted (at first) by the evil black dragon Deathwing, but Deathwing's true purpose was to steal some of Alexstrasza's eggs to replenish his own decimated dragonflight. With a gemstone created from Deathwing's scale, Rhonin was able to destroy the Demon Soul and release Alexstrasza.

During this mission, Rhonin and Vereesa fell in love, and were later married. Along with Vereesa and Krasus, Rhonin was among the few well-known survivors of the Scourge that destroyed Lordaeron, Dalaran, and Quel'Thalas after the corruption of Prince Arthas. Most of Rhonin's family, including his father, were killed during the fall of the town of Andorhal.

While he and Vereesa were preparing for the birth of their twin offspring, Rhonin was once again summoned by Krasus for help. Apparently, the dragon-mage had discovered a rift in time, which swallowed both of them, along with the orc veteran Broxigar. The three were sent 10,000 years back in time to the first invasion of the Burning Legion.

While in the past, Rhonin encountered legendary beings such as Cenarius, Malorne, and Aviana. He became friends with the heroes Illidan Stormrage, Malfurion Stormrage, Tyrande Whisperwind, Jarod, Maiev Shadowsong, and Shandris Feathermoon. Rhonin actually became Illidan's mentor, not in the least to try and harness his reckless power, but despite Illidan's admiration much of Rhonin's work involved cleaning up Illidan's mistakes. When Illidan defected, Rhonin assumed command of the Moonguard. As a reward for Rhonin's courage, Nozdormu allowed Rhonin to return to Vereesa at the moment she went into labor to ensure he would not miss a moment of the twins' lives. Nozdormu also offered the children the friendship of the bronze dragonflight.

In more recent years, Rhonin has found himself in the position as the leader of the Kirin Tor and Dalaran, having been approached by the Kirin Tor in desperation.[5] In Rhonin's own explanation to Iridi, "the Alliance is still looking to Dalaran for a lot and the wizards are looking for me to think different than they've been doing for the past several hundred years." However, even though all he really wants is to be with his family, his sense of responsibility impels him from ever abandoning such important roles, or his people.[6] Much like Tirion Fordring, he is still loyal to the Alliance despite its recent hostilily against the Horde.

No surname has been confirmed, though he is sometimes referred to as "Rhonin Redhair", based on his hair color. It is unclear if this is his surname or just a title.[7][8][9] Night of the Dragon also mentions that many in the current time-frame refer to him as "Rhonin Draig'cyfail" or by the simpler, translated "Rhonin Dragonheart".[10]

He is apparently able to speak or translate Ursine.[11] He has also become a skilled swordsman from his experience during the Legion invasion.

Rhonin is a studious type who knows a little bit about a great many things, but generally keeps his knowledge to himself. He is very young, but his youth disguises a spellcaster of great power and flexibility. He is reckless and hot-headed, and is known frequently not to look before he leaps, a character flaw he recognizes in himself and yet is hard pressed to keep under control. He also has a great sense of humour and is used to seeing huge dragons (such as Alexstrasza and Dargonax).[12]

As a quick study of his spell selection will indicate, Rhonin prefers to use his sorcerer abilities for versatility in combat while his wizard spells are usually left to more mundane tasks. He generally starts off a fight with the most powerful spells at his disposal, working his way down to employing searing arrows in concert with his crossbow once all his other combat spells are exhausted.[12] He is also known to be skilled with the sword.[2][3]

An epic cloth chest piece known as the [Robes of Rhonin] drops off Archimonde in the Caverns of Time raid Battle for Mount Hyjal. Presumably, these may have been robes worn by Rhonin himself. This raises the question of how Archimonde came to possess his robes (possibly during the War of the Ancients when Archimonde incapacitates Rhonin).

Rhonin appears in the Wrath of the Lich King expansion as the leader of the Kirin Tor. He is located in the rebuilt and relocated city of Dalaran in Northrend, with Vereesa Windrunner, Archmage Modera, and Archmage Aethas Sunreaver at his side. He is fighting the blue dragonflight and their leader Malygos, who is determined to destroy mortal magic-users.[13]

Initially, Rhonin had a much lighter, almost blonde hair color (resulting in some players referring to him as Rhonin Goldhair); this appears to have been changed to a redder hue (befitting the lore) as of Patch 3.1.

When your character hits level 80, Rhonin will mail him or her a Magically Wrapped Gift, containing 5 each of the following items: Runic Healing Potion, Runic Mana Potion, Potion of Speed, and Dalaran Firework.

In the Secrets of Ulduar patch preview cinematic, Rhonin calls Varian Wrynn, Jaina Proudmoore, Thrall, and Garrosh Hellscream to Dalaran to discuss dealing with the threat within Ulduar. When Varian and Garrosh begin fighting, Rhonin stops them, claiming that the Horde and Alliance must work together.[14]

After Algalon the Observer has been defeated. Rhonin makes an announcement to the citizens of Dalaran.

Jaina is later to be revealed the new leader of the Kirin Tor as Rhonin's successor, but she will not be leading as a neutral party due to the fact that the orcs destroyed Theramore Isle. Jaina sees a new light with a new antagonism towards orcs.

Rhonin dies in Tides of War during a desperate attempt to dampen the mana bomb explosion by using magical defenses of Theramore in the mage tower and names Jaina as his successor. His efforts were at least partially successful. Saving his wife Vereesa, Sentinel General Shandris Feathermoon and their scouting parties from explosion. Kalecgos later notes that without this sacrifice, the explosion would have been far more devastating.

Night of the Dragon

As of Patch 3.1.3, he is still silent when clicked on, despite having voiced quotes in the aftermath of All Is Well That Ends Well. 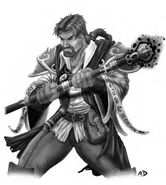 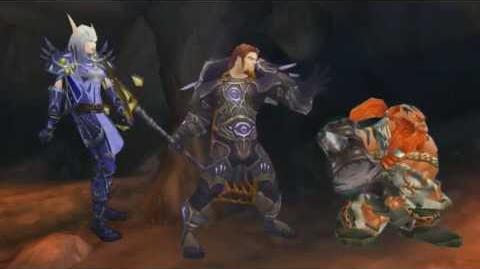