WoWWiki
Register
Don't have an account?
Sign In
Advertisement
in: Pages using duplicate arguments in template calls, Quests that have changed, Rogues,
and 6 more
English

Rogues are melee damage dealers. They have access to a wide range of specials that depend on their constantly refilling pool of energy. Unlike other classes, rogues should be in close to attack.

The primary advantage rogues have is their ability to stealth. Unless the rogue is very close and in a 180 degree arc in front of them, or much lower level, players are usually unable to see them.

Rogues acquire the passive ability to Detect Traps, which can be very valuable in PvP situations against a hunter, or in dungeons with traps, such as Icecrown Citadel.

Rogues are best suited for players who like to sneak up on enemies and dish out large amounts of burst damage.

In Warcraft: Orcs & Humans, rogue was an achievable rank.

Rogues possess a wide range of skills that allow them to accomplish feats from finding secret doors to smacking a magic item until it works. They are excellent in a fight, and if they can strike quickly or unseen — or are flanking an enemy with the help of a thoughtful ally — they can be truly deadly. Of course, they also excel at stealth.[1]

The rogues of Azeroth are the masters of subterfuge, skilled and cunning adversaries of those who dare not look into the shadows to see what lurks there. Roguery is a profession for those who seek the adventures of stalking in silent forests, dimly lit halls, and heavily guarded strongholds. Using trickery in combat and able to vanish at the slightest distraction, the rogue is a welcome addition to any group of adventurers. Ideal spies, deadly to those they can catch unaware, rogues have no problem finding a place in the world. Deadly masters of stealth, rogues are the whispers in shadowy corners and the hooded figures crossing dark fields. Skilled with daggers and the art of silent death, these vagabonds and bandits skulk about Azeroth seeking targets and profit. A member of almost any race can learn the tricks necessary to become a skilled rogue. Still, for the tauren and draenei, such a profession is an alien concept and therefore rare among those peoples.[2] Whether they are diplomats, spies, thieves, scoundrels, entertainers, or simply adventurers, they can be found plying just about any trade from Mount Hyjal to Ratchet.[3]

For as long as there were dark alleys and needs for dark services, there have been rogues, and thus they are one of the oldest professions in Azeroth. Rogues are a diverse class, and they are typically made up from the dregs of society — cutthroats, pirates, robbers, and lowlifes. The only code rogues live by is the contract, and their word is only as good as the money their services are bought for. The diverse aspects of their trade requires rogues to be well versed in lockpicking, toxicology, rudimentary alchemy, and brawling. In combat, rogues rely on the element of surprise and tactics which are regarded by most as vile and cowardly. They are rarely seen entering a fight without weapons laced in poisons and ample supplies of everything from bombs to elixirs in their backpacks. Their attacks concentrate on weak points in the body in an attempt to finish fights brutally and quickly. Rogues play prominent roles in every aspect of society. They will rarely be written into history books because their involvements will be largely unknown to the common person, but they are always there, greatly affecting the flow of events from the shadows.

From the high-contract assassin hired in secret by respected noblemen to the lowly street mugger, rogues are the ones called upon when maintaining the status quo requires a questionable solution — and by fulfilling it, they are branded as outcasts by the very society that calls upon their service.

In Azeroth, rogues are largely free agents, though some prefer to join an organization for safety and ease of employment. Ravenholdt and the Syndicate are examples. Other recognized rogue organizations include the Shattered Hand, the Deathstalkers, and SI:7.

The rogue class can be played by the following races:

Tauren and draenei are the only races that do not have rogues because they believe their methods dishonorable. It is also difficult to remain stealthy with hooves (though this does not appear to be an issue for satyrs). However, in the game files, both draenei and tauren have stealthing animations, and as such, Eredar and Broken have such motions. Some people believe the reason of this is only because of the [Orb of Deception] item and/or GM command testing. It may also have to do with the hunter ability (available to draenei and Tauren), Camouflage.

Although rogues excel at melee combat, they may only learn to use five types of melee weapons: daggers, fist weapons, one-handed maces, one-handed swords, and one-handed axes[4].

A rogue's most fundamental abilities, such as Sinister Strike and Mutilate, are instant attacks which inflict damage based on the weapon damage of the rogue's main-hand weapon. Rogues therefore find it desirable to use a weapon with the best average damage to maximize their DPS.

The common rogue prefers a slow weapon in the main-hand and a fast weapon in the off-hand. Some rogues prefer fast weapons in both hands in order to apply more poison, but the final gain from using a fast main-hand is debated since weapon enchantments, such as rogue poisons, usually have a "fixed" system for proccing (see proc, poisons and normalization). That, plus the extra damage from the special attacks performed with a slow main-hand and the normal damage itself, implies that there is little or nothing to win with choosing a fast main-hand when attempting to produce more damage. Although having a fast main hand may increase the amount of physical damage you do in a shorter period of time, the bonus does little for DPS.

Finally, whether a rogue is using a fast main-hand or a slow main-hand, it is taken as common knowledge among rogues that the OH should always be a fast weapon. This is because the off-hand, unlike the main-hand, does not have any crucial "duty" when performing abilities, thus its role consists nearly entirely of applying poisons. The only exception where a slow off-hand is preferable is when using a few abilities which contribute more from slow weapons than from fast, like Killing Spree and Mutilate.

Stealth is the first major class ability a rogue can get. They have the ability to stealth and become essentially invisible to enemies their level and lower while moving at slower speed. Stealthed rogues are detectable at close range, though will remain stealthed and appear translucent. Be aware that higher level characters and mobs can more easily see through stealth.

Many rogue abilities require stealth and others require being behind the target, which is often achievable (while solo) only in stealth. Other rogue abilities, notably Sprint and Distract, interact well with stealth. Some actions, like lockpicking, will break stealth.

Stealth opens up a range of tactics and roles for rogues. Groups often rely on a rogue's stealth ability to scout dungeons, and to use Sap for added crowd control. In PvP, stealth combined with burst damage gives an element of surprise that can be especially effective against cloth-wearers.

Stealth can be improved through talents, items, and enchantments, both to decrease the chance of being detected and to increase movement speed.

A rogue starts off with the dual wielding skill. Dual wielding is a trade-off with an increased chance to miss with each weapon and reduced damage on the off-hand, but it is a good ability for a rogue. A rogue cannot use a two-handed weapon (which have bigger stat buffs), cannot carry a shield, and has few good offhand choices (offhand items tend to all have caster stats). A second wielded weapon is the only way to reliably get two hands worth of rogue stat buffs.

Poisons generally either cause damage to the target (either instantly or as damage over time) or cause other effects (slowing the target, removing the effectiveness of healing on the target, etc.). Different weapons can have different poisons applied and faster weapons cause the poison to proc more often.

Poisons are a temporary weapon buff, and as such do not stack with other enhancements such as sharpening stones.

All poisons have a timer of one hour. The poison timer is displayed on the weapon's properties when mousing over the weapon. Applying poison will not break stealth or shadowmeld.

A variety of talents in the assassination specialization enhance the use of poisons.

[24] Klaven's Tower; if players dropped by S1:7 in Stormwind, Master Mathias would send them to Kearnen when the time was right by giving the

[20] Mathias and the Defias quest.
The Horde's version was in Orgrimmar from Shenthul called

[24] Mission: Possible But Not Probable.

Prior to patch 3.0.2 and Wrath of the Lich King, the ability to brew poisons from ingredients was a secondary skill, similar to Cooking or First Aid, but available only to rogues. The skill is no longer available in the game.

Rogues have the ability to pick locks. This allows them to open locked chests, lockboxes, and doors, depending on the rogue's skill in lockpicking and the level of the locked object. Lockboxes can be pickpocketed from mobs or found as loot. Rogues no longer are required to train lockingpicking skill; it is now passive, granting higher skill as the player levels at a rate of +5 per level.

A rogue's main priority in raiding is maximizing melee DPS while staying alive. Put threat-reducing abilities (namely, Feint, Vanish and Tricks of the Trade) to good use and use them before gaining aggro. As with all melee DPS classes, rogues are expected to come to raids with ample supplies of flasks, potions, food, and bandages. Depending on the particular situation, rogues may not get many heals. If that's the case, rogues should be prepared to heal themselves.

Rogues are utilized as interrupters with some bosses such as Kel'Thuzad and General Vezax, and can be asked to dismantle in instances like Onyxia's Lair. 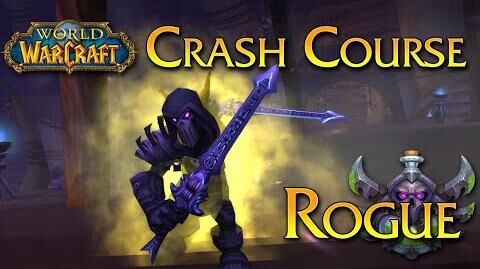