Running Wild is a worgen racial ability, treated by the game as a mount. This ability, only usable outdoors, causes the worgen to stretch onto all four legs, increasing movement speed by 60% at level 20-39, and by 100% faster at 40+.

Due to their ties with the wilds, worgen are able to call upon their bestial fervor to travel great distances. With the aid of all four limbs, a worgen can sprint at speeds rivaling the swiftest horses, nightsabers, and mechanostriders. As though it satisfies some primal urge deep within, worgen relish this mode of travel over those used by Azeroth’s other races, who rely on mounts to transport them.[1]

Running Wild | 2010-09-18 00:00 | Zarhym
Running Wild is indeed the new racial "mount" for worgen. Functionally the ability works exactly like a mount. This does mean the worgen are not bringing faction mounts to the table which other Alliance races can access. This is also of course very different from the original Plainsrunning implemented for taurens. We have no plans to try and bring that ability back in any form.

Ultimately, we feel Running Wild fits very well with the nature of the worgen race. Rather than getting a physical mount, they get down and sprint on all fours. When you're playing a worgen, it just feels awesome. :) 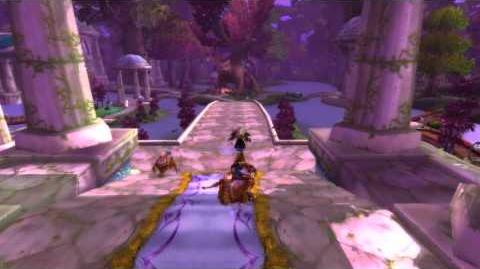