Saber cats (or sabercats)[1] are a special type of large fanged cat, similar to the (extinct) sabertooth cats of our world. They come in a variety of colors and have either spotted or striped coats, the striped type being the more common. Night elves carry a special affinity for sabers and use them as mounts, which are available for purchase in Darnassus.

Saber cats are proud magnificent felines that have helped the night elves against foes of all sorts since Kalimdor was first settled. The great cat moves with fluid grace along the mountainsides of Kalimdor, its golden eyes gleaming with intelligence. They are intelligent and loyal when domesticated, but are feral and quite aggressive when left in their natural environments.[2] (MoM 20) [3] (APG 202)

In combat, the nightsaber cat is a deadly foe, leaping from the shadows to rend its foes with its fangs and claws.[3] (APG 202)

A nightsaber cat is virtually invisible while under the cover of darkness.[3] (APG 202)

Nightsabers are the traditional mounts of the Sentinels, and about as common among the elves as a riding horse might be in a human city.[3] (APG 202)

Frostsabers are legendary cats native to Winterspring, and they are highly sought after by the most experienced Sentinels as mounts. The night elves view frostsabers as sacred, and treat them with more respect than almost any other creature. In recent years, with the coming of the goblins to Winterspring, frostsaber trainers have begun selling their trained mounts for the first time in history. Traditionalists view this as blasphemous, but many understand that the coin from such sales often goes to a worthy cause (and the frostsaber trainers are highly selective about just who they are willing to sell to). Frostsaber cats are intelligent and loyal when domesticated, but feral and aggressive when left in their natural environments.[3] (APG 202)

The frostsaber cat is a fearless opponent; its thick fur has the resilience to shrug off minor damage. It uses its fangs and claws against those foolish enough to engage it in melee combat.[3] (APG 202)

Frostsabers are difficult to train, and thus traditionally only experienced Sentinels were ever capable of convincing one to serve as a mount.[3] (APG 202)

A purple frostsaber native to Winterspring, usable as a mount by the Alliance. Requires Exalted with Wintersaber Trainers to buy the mount and Apprentice (75) [Riding] skill. 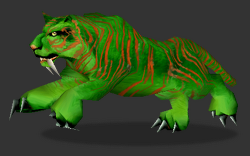 The corrupted saber is the form taken by a regular cat that is exposed to large quantities of Moonwell water from the corrupted Moonwell at the Ruins of Constellas. It is large and green with orange stripes, a homage to Cringer/Battlecat from the cartoon He-Man. Winna Hazzard, an undead at Bloodvenom Post, requests that passing by adventurers take one of her cats to the corrupted Moonwell, which is possessed by the Jadefire satyrs, to create a corrupted saber for her use.

Ghost sabers are occasionally summoned by looting Cat Figurine relics found in the Ruins of Mathystra in northern Darkshore. They have white pelts with black spots, just like snow leopards, except they are transparent.

They can be tamed and are good choice for a unique look, appearing as if they are stealthed all the time. When truly stealthed, they become almost completely transparent. Once tamed, the ghost saber will die spontaneously after a few minutes. This appears to be from the pet retaining a timer it was spawned with. It appears to only happen once, after which it behaves normally. They have a 2.0 attack speed.

Dreadsabers are golden sabers that live in Sholazar Basin. Hemet Nesingwary came to the Basin, intrigued by the dreadsabers. Their incredible strength and ferocity surpassed that of the Winterspring frostsabers and allowed them to bring down larger prey than Hemet has ever seen a cat hunt. To overcome and kill such a predator is seen as the mark of a true hunter, so Buck Cantrell sends those seeking to impress him to test themselves against the dreadsabers.

[Striped Dawnsabers] are striped orangish-brown saber mounts found in Darnassus. The Swift Dawnsaber mount is not striped and is a plain brown. Riding one requires Level 40, Journeyman (150) Riding, and Exalted with Darnassus.

The saber mounts are bought in Darnassus and in the Argent Tournament except for the Wintersaber, Zulian Tiger and Spectral Tiger.