The Dragon (formerly)
The Frost Wyrm
The Beast

This article is a character biography. For information on how to defeat Sapphiron in World of Warcraft, see Sapphiron (tactics).

Sapphiron was an agent of the blue dragonflight who had guarded a treasure hoard in the mountains of Northrend. After being slain by Arthas Menethil, the dragon was raised as a powerful frost wyrm and sent to the halls of Naxxramas, where he guards the inner sanctum of the citadel's dread master, Kel'Thuzad.

Once a noble blue dragon within the mountains of Northrend, Sapphiron was slain by Arthas during his campaign through the frozen north. Resurrected to serve him, Sapphiron guards Kel'Thuzad's lair eternally, awaiting those who would dare trespass upon his master. Said by Commander Eligor Dawnbringer

An ancient servant of Malygos, Hand of Magic, Sapphiron was a blue dragon who lived with a powerful brood in Northrend by the Dragonblight, where he communed with the ancient spirits of the dead dragons. Sapphiron was magnificently powerful, and protected the lands of Northrend as best he could. Though Ner'zhul's malevolent influence defiled the Dragonblight, Sapphiron and his brood continued to guard his hoard of treasure from any and all intruders.

Sapphiron and his brood lived in relative peace until King Arthas, champion of the Lich King, was suddenly called back to Northrend to save his weakening master, Ner'zhul. After three weeks at sea, the Death Knight landed on the shores of Northrend near Sapphiron's frozen lair, and was greeted almost immediately by the Crypt Lord Anub'arak, King of Azjol-Nerub, another powerful servant of Ner'zhul. Anub'arak had sensed Sapphiron nearby and suggested to the young Death Knight that perhaps by equipping themselves with the ancient blue wyrm's treasures, he and Arthas might be better prepared for the perilous journey through the underground kingdom of Azjol-Nerub to Icecrown Glacier. Arthas agreed, and boldly journeyed into Sapphiron's lair with Anub'arak.

The two servants of the Lich King fought their way through Sapphiron's minions till they finally reached the great blue dragon himself. Sapphiron confronted the undead as they approached him. He found Arthas's honesty about killing him and stealing his treasure quite "refreshing". Sapphiron and his fellow dragons attacked with all their might, unleashing their strange, cold frost magics upon them. In the end, despite all odds, Arthas was victorious, and Sapphiron was defeated. As a final, clinching victory, however, Arthas used what remained of his dwindling necromatic power to recreate Sapphiron as a frost wyrm to serve the Scourge.

Sapphiron, now a mighty frost wyrm, assisted Arthas in destroying the Naga and Blood Elf forces blocking the passage to Azjol-Nerub. Sapphiron was called upon again to destroy the dwarves guarding the gates to Azjol-Nerub, but the great dragon was left outside of the tunnels, where he guarded it against all who would disturb his new master.

Some years later the Scourge attacked once again and Sapphiron was sent with Kel'Thuzad to the Eastern Plaguelands to guard the Black Citadel Naxxramas.

Sapphiron's powers are significantly greater than those of the average Frost Wyrm. This could be because Arthas, the Lich King's champion, revived him personally, or it could be a reflection of Sapphiron's greater power in life, or it could be some combination of both.

Sapphiron has held onto his [Key to the Focusing Iris], throughout these events. The eye acts as a key to Malygos's home: The Eye of Eternity.

A reference is made to Sapphiron in the item [Sapphiron's Wing Bone]​​, which can be purchased from G'eras in Shattrath City for 25

Sapphiron appears in Wrath of the Lich King as the boss guarding the way into Kel'Thuzad's chamber in Naxxramas.

Sapphiron: You dare enter my lair? I am Sapphiron, ancient servant of Malygos the Spell-Weaver! Explain yourselves!

Arthas: Sorry we don't have time to chat, great wyrm. We've come to murder you and steal whatever artifacts you've been hoarding over the centuries.

(Sapphiron is defeated by Arthas)

Arthas: At least I still have enough power to do this...

(Sapphiron is raised by Arthas as an enormous Frost Wyrm)

Statistics of Sapphiron from Warcraft III

However, stats from the World Editor are much weaker than in the campaign and original Frost Wyrms. Sapphiron's attacks become much greater than a Frost Wyrm once his attack and defense are upgraded from the graveyard. He also attacks much faster than a normal frost wyrm. 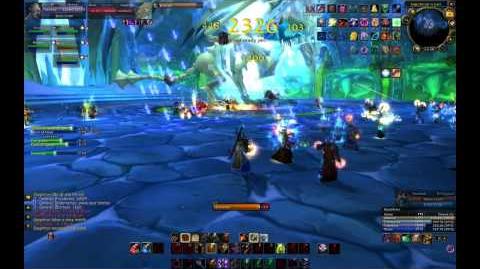