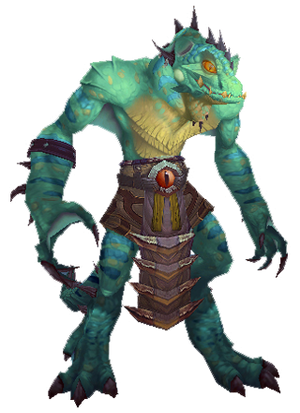 In the search for shock troops to consolidate their hold over ancient Pandaria, the Mogu turned to an unlikely source: the fauna of the Vale of Eternal Blossoms. The Mogu chose several particularly sturdy varieties of local reptiles, and twisted them in body and mind, imbuing them with an upright gait and sufficient intelligence to wield weapons. But these reptilian servitors were spectacularly ineffective: they attacked their commanders, fled from battles, and prized plunder over obedience. Furious, the Mogu slaughtered them in great numbers and crushed their breeding chambers... yet, today, the experiments outnumber their creators.
After the Mogu withdrew from the Pandaren empire, their creations, the Saurok, survived by scrounging and hiding in the wild places of Pandaria. As lone bandits possessed of brute strength and innate aggression, the Saurok can be dangerous enough – but they have slowly begun to organize in roving warbands. Unburdened by 'civilized' notions of property, these raiders charge into battle, seeking the spoils of softer races.

The Saurok are a type of lizard-humanoid created by the Mogu, originally intended to serve as simple fighters for the Mogu empire. Over the years, some escaped and formed bands of their own, and now lurk in the countryside as thieves and bandits.[1] 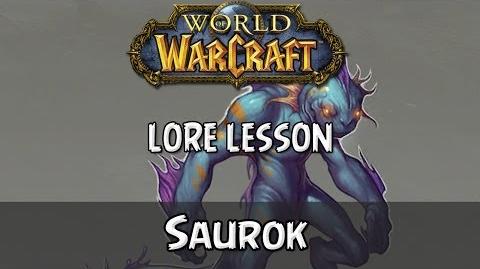