This article is about the night elf elite guard. For other uses, see Sentinel (disambiguation).

The Sentinels, also known as Sentinel Army, are an elite guard belonging to the night elves.[1] (WRPG 73) Given the threat of invasion that constantly looms, few roles are as critical to the defense of the land as the sentinel. Sentinels perform guard duty.[2] (MM&M 103) Sentinel is an ancient title, its skills are rooted in ancient tradition from even before the time of Queen Azshara.[3] (WoWRPG 100) The Sentinels were established shortly after the War of the Ancients, and until recently all of its soldiers were night elf women. They were created in order to replace the old army.[4] Sentinels are elite archers and skirmishers, capable of doing tricks with the bow that few others can hope to match.

Sentinels are proficient with all simple and martial weapons and with light and medium armor, due to her extensive study of her foes and training in the proper techniques for combating them. In addition, sentinels are proficient in the use of arrows as a melee weapon. As a class, it shares elements from archer, hunter, and scout classes.[1] (WRPG 73) Their hatred of orcs has also fueled their participation in the Alliance. After the death of Cenarius during the Third War, many sentinels, druids and warrior night elves began a great hunt. Some night elves happily hunt orcs as a repayment for Cenarius’ murder.[3] (WoWRPG 38) Druids of the wild now strive to heal and restore the land, while sentinels keep their eternal watch for enemies both seen and unseen.[1] (WRPG 44) Night elf sentinels favor moonglaives.[3] (WoWRPG 186)

Sentinels are found in many night elf villages in World of Warcraft, as well as among other races.

Not long after the night elf druids entered the Dreamways of Ysera's Emerald Dream, high priestess of the Sisters of Elune, Tyrande Whisperwind, assembled a powerful fighting force from amongst her night elf sisters. The fearless, highly trained warrior women who pledged themselves to Kalimdor's defense became known as the Sentinels. This period in history became known as the Long Vigil, and ended when the druids were awakened prior to the battle for Mount Hyjal.

The Sentinels included a number of night elves who had fought bravely during the War of the Ancients. Chief among them was Shandris Feathermoon. Orphaned during the Legion's invasion, she was taken under Tyrande's care. Young Shandris distinguished herself in combat time and again throughout the conflict. Her heroics earned her a place at Tyrande's side thereafter, and when the Sentinels were forged, Shandris was named captain of the fledgling order.[5]

These warrior women practice both the art of combat, as well as that of healing and life-giving in the name of Elune. The Sentinels are considered the elite fighters among the night elves. They are led by the priestesses of the moon under the high priestess, Tyrande Whisperwind, and her lieutenant, Shandris Feathermoon. The Sentinels are comprised of elite night elf archers, a cavalry division known as the huntresses who ride the feral nightsaber panthers, and the mighty hippogryph riders, who assault enemies from the air.

Sentinels share almost the exact customs as high elf rangers, to the point where you can only tell the difference by race. Many Sentinels fulfill their duties as huntresses, riding astride great nightsaber panthers, or as windwarriors astride hippogryphs.[6] (APG 127) Sentinels are also the night elf version of elven ranger class.[1] (WRPG 73) 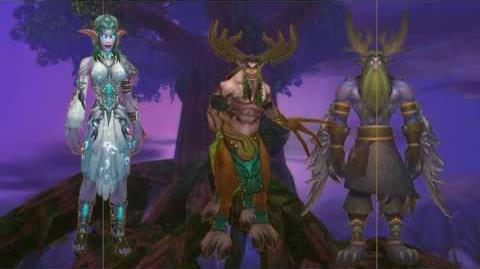