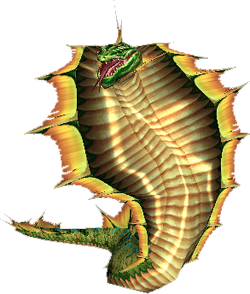 Serpents are large cobra-like snakes that come in a variety of colors. They are good swimmers and attack with their fangs and Poison Spit. Serpents are found in Shadowmoon Valley, Tanaris, Sholazar Basin, Northern Stranglethorn, and Thousand Needles, as well as dungeons like the Wailing Caverns, Zul'Gurub, Zul'Farrak, and Sunken Temple.

Serpents were not normally tamable for a long time. Sandfury Guardians were briefly tamable as a bug (classified as wind serpents). However, the family was rendered tamable with patch 2.0.

With the advent of

Mists of Pandaria, a new serpent became available to tame. Mana serpents are found mainly in Northrend, in such places as Dragonblight. They are a floating serpent, technically dragonkin.

Though hunters can respec their pet serpents into Ferocity or Tenacity, they are inherently Cunning. In addition to the abilities that come standard with all pets ([Growl] and [Avoidance]) and those given to their natural or retrained specialization, all serpents are given the following: