Alliance is leading the ratio at around 2:1.

Update as of 25.02.11: Old progression charts are outdated, and might be removed. Follow WoWprogress.com - Stormrage-EU for rapidly updated raid progression for each and every guild on the server.

Update as of 25.02.11: Old progression charts are outdated, and might be removed. Follow WoWprogress.com - Stormrage-EU for rapidly updated raid progression for each and every guild on the server.

Genesis, Nightcrawlers, Carpe Cerevisi and Orion were the leading guilds. With Genesis getting all the way up to 4 Horsemen (4HM) before The Burning Crusade shipped.

Genesis, Initium and Orion were the main competetors on the alliance side during this era. But guilds such as Flawless, Carpe Cerevisi and Impulse Raiders followed closly behind. Server first Kil'Jaeden went to Orion 16th of September 2008.

WotLK has had a lot of twists and turns during this expansion. Many of the leading Alliance guilds have either died down or disbanded completely. This makes Initium the main competetor to become the best Alliance guild on the server. As of 30th march 2010, they're at 6/12 HM ICC25. To be continued. Update 25.02.11: No Alliance guilds were able to take down Arthas in heroic 25 man mode before the release of Cataclysm. Several kills of the 10 man were done, with pugs getting clears in late 2010.

Elitism were the top guild during this era, with not really any competition on the Horde side.

Elitism dominated again this era on the Horde side. Get Geared or Wipe Tryin, Extend and Evolution were following closely, but were always a step behind.

At the end of 2009 and still far into 2010, Horde guilds have been dominating the raiding scene. The guilds Elitism and Heretic has been following each other like shades, with Extend and Evolution following relatively close behind. As of march, both Elitism (Migrating) and Extend (Disbanding) will halt there progression, and Heretic will then take over the lead on the server. To be continued. Update 25.02.11: Heretic won the race with 12/12 25 man HC at 02.08.10 Several kills of the 10 man were done, with pugs getting clears in late 2010.

Damnation moved to Stormrage in Mists from (recourses needed)

This period were filled with skilled and talented PvP players, and were the period with the most world PvP going on. Notable locations being Stranglethorn Vale, Crossroads and Light's Hope Chapel. Many Taurens (!) were hurt during these battle.

Stormrage obtained quite few high ranked players, and teams were formed and held together throughout Pre-TBC and into later expansions. The spirit of competition between the two factions were something that kept the server together, and will be a fond memory of many vanilla-veterans. The introduction of the Cyclone battlegroup broke this bond, when the pre-formed hardcore teams rarely met eachother within Pvp. Stormrage were a feared server at the early stages of the Battlegroup merge during this period. Having high ranked teams from both Alliance and Horde ravaging opposing teams from different servers. A notable picture from this era PvP - Pre-TBC 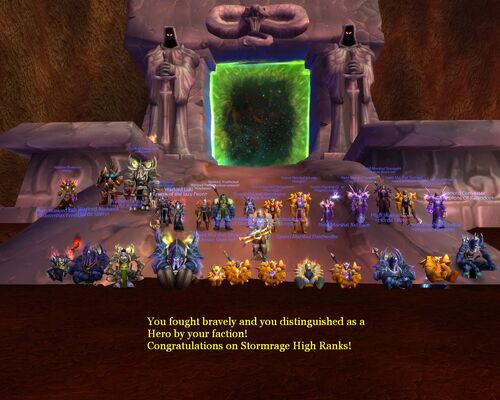 On Alliance side there was only one guild worth mentioning MARINE MARAUDER MANABURN, founded by what was accepted as the best pvp'ers on stormrage (Tankz, Bumeyes, Ferno, Shirycuta, Gaarra, Undergroundz and LegacyofXhia) it lasted a year before they started recruiting after the guild became famous and gaining numerous gladiators due to Tankz streaming his way to Rank 1.

PvP progression for Cataclysm is not updated.

This is the list of the original Scarab Lord's from the Ahn'Qiraj opening event in early 2006. An event which brought the server closer together in an effort to get the job done.

The Horde guild Phoenix has been mother of the movie The Hardware Store, an excellent WoW Music movie made by Slegg and Maere.

Movies and videos can be downloaded from