Shade of the Horseman

For the seasonal boss, see the Headless Horseman.

Shade of the Horseman

Shade of the Horseman will attack

Falconwing Square. These attacks consist primarily of Shade of the Horseman circling overhead on a flying horse. As he circles the village, he throws flaming pumpkins at the various buildings, and at points, at players.

[70] "Let the Fires Come!". This quest is only available during the Hallow's End World Event.

A player who has completed

[70] Stop the Fires! instead. These are both daily quests, and only one can be completed each day. For a short time after the event has concluded (by the characters slaying the shade, or the shade riding off), neither quest will be offered.

The Shade will throw flaming pumpkins at several of the buildings in town. Fires will appear there, and start throwing burning embers, starting fires nearby. The players are able to loot [Water Buckets] from a nearby large water tub, and throw the water as a targeted AoE effect either on a fire, or to a nearby player. Each time a bucket of water is thrown on a patch of fire, the fire there will be reduced somewhat, or extinguished. Fires increase in size over time, though, and when they have reached their maximum size they start causing nearby areas to catch on fire as well.

If all the fires are put out before the Shade rides off, then the Shade will land and attack characters who are nearby. When slain, a Large Jack-o'-Lantern will spawn on the ground nearby, offering the daily quest Smash the Pumpkin for a short time. (You need not have been present when the shade was defeated to be offered the quest.)

During the time the pumpkin is on the ground, the Orphan Matron nearby will offer high level characters the quest

At the beginning of the attack
Prepare yourselves, the bells have tolled! Shelter your weak, your young and your old! Each of you shall pay the final sum! Cry for mercy; the reckoning has come! [guffaws terribly]

Part-way through encounter
The sky is dark. The fire burns. You strive in vain as Fate's wheel turns.

Upon successfully dowsing his flames
My flames have died, left not a spark! I shall send you myself to the lifeless dark!

Upon failing to douse his flames
Fire consumes! You've tried and failed. Let there be no doubt, justice prevailed!

Upon successfully defeating Shade of Horseman's body
So eager you are, for my blood to spill. Yet to vanquish me, 'tis my head you must kill! [horrifying guffaw]

Shade of the Horseman cannot be attacked while he is in the air.

The encounter may scale to the number of players in the area. This makes it possible to solo the event if you're alone, but it can also make the event near impossible to complete if there are a number of people not participating.

The encounter starts with the shade setting 1-3 fires (depending on number of people in the area). Fires are laid out on a square grid. Fire have three levels, and periodically grow in size if left alone (the speed of growth is also dependent on number of people nearby). When a third level fire grows, it sends out embers into any adjacent spaces that don't currently have fires, starting level one fires there.

The trick to fighting established fires is to limit their potential growing area as you slowly push them back. If an entire building is on fire, pick one end to start with, otherwise start with whatever side is open to more burnable spaces. Don't put out level one fires if there are level three fires adjacent, or they'll just be re-kindled; knock the level three down first (or along with the level ones). Buckets hit a number of spaces at once, so try to center them one space into the burning area, so you're putting out the front line while you're driving down the spaces behind them.

If you can get everyone to concentrate on a single building at a time, it makes putting out the fires a lot easier. The fires spread if you leave them alone or cannot put them out fast enough, so its easiest to put out one building and then the next rather than trying to put out two buildings simultaneously.

A useful tactic is to form a bucket line. Someone stands close to the water tub, loots water buckets from the tub, and throws them to someone closer to still-burning fires. If necessary, that person throws to someone yet closer.

Because of these, it is useful to arrange the bucket line before starting the event.

Another useful tactic is for all nearby players to have buckets in hand before the event is started. Putting out fires that are further away from the bucket, before they get a chance to spread, makes it much easier to win the event.

If you are not in a bucket chain, any speed increase is useful. Druids and Shamans can use items while shifted so Travel form and Ghost Wolf respectively make you much more effective. Also, if you are in a group with a Hunter they can make you run much faster with Aspect of the Pack. Also, as you instantly mount the Flying Broom, it makes it a useful mount for this. 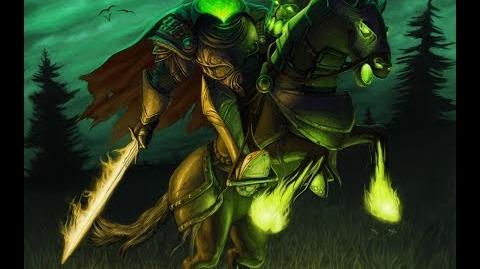 The Story of the Headless Horseman Lore