For other uses of the term "Shadow", see Shadow (disambiguation).

(also referred to as "the Void" and "the Darkness")

Shadow and Light are the most fundamental forces in existence. They are bound together on a cosmic scale, although contradictory by their very nature. One cannot exist without the other. Pure Shadow and Light dwell in a realm outside the borders of reality, but shades of their presence are found in the physical universe. Shadow and Darkness (also referred to as "the Void") appears as shadow magic.[1]

The Light is often said to bring about feelings of positive emotion—hope, courage, comfort—and the like. Shadow abilities are just the opposite, able to impart feelings like despair, doubt, and panic. In a poetic sense, it can be said that the emotions which the Light brings about come from the "heart," whereas the emotions manipulated by shadow are often based on survival logic, and therefore affect the "mind."[2]

It is stated that before life began, before even the cosmos took shape, there was Light ... and there was Void. However, the Light, unfettered by the confines of time and space, swelled across all existence in the form of a boundless prismatic sea. Great torrents of living energy flitted through its mirrored depths, their movements conjuring a symphony of joy and hope. The Light's ocean was dynamic and ever shifting. Yet as it grew, some of its energies faded and dimmed, leaving behind pockets of seemingly cold nothingness.[4]

From the absence of Light in these spaces, a new power coalesced and came to be. A dark and vampiric force driven to devour all energy, to twist creation inward to feed upon itself, this power was the Void. The Void quickly grew and spread its influence, moving against the Light's flowing waves. The mounting tension between these two seemingly opposing yet inseparable energies eventually ignited a series of catastrophic explosions, rupturing the fabric of creation and birthing a new realm into existence. In that moment, the physical universe was born.[5]

The most unstable energies coalesced into an astral dimension known as the Twisting Nether. Light and Void collided and bled together at this realm's edges, throwing it into turmoil. Linked to the Great Dark Beyond, although tangentially, the Twisting Nether existed outside the physical universe's borders.[6]

The dark naaru are creatures of living holy energy and, presumably, shadow energy. It is EXCEEDINGLY rare for a naaru to fall into a void state, and even rarer for a fallen naaru to be brought back into the Light. A naaru's fall into the void represents a catastrophic loss for the naaru and for the forces of the Light, and it is the saddest, most heart-wrenching event for the naaru to witness. Conversely, a naaru being reborn into the Light brings renewed hope and sense of purpose to every naaru.[7]

C'Thun, the Old God of Madness and Chaos

Yogg-Saron, the Old God of Death

N'Zoth, the Old God of Madness

G'huun, the Old God of Blood

Deathwing, the Dragon Aspect Demon and Old God of Death

The Old Gods are physical manifestations of the Void. They are nightmares incarnate: mountains of blighted flesh and writhing tentacles that grow like cancers within the worlds of the Great Dark.[8] 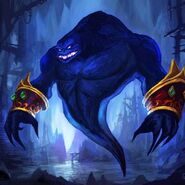 Grimnar: "It will be done." 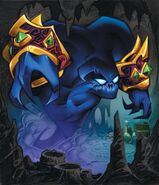 Sarmoth: Voidwalkers do not fear pain, so they are popular with warlocks who do.

Enigmatic and emanating pure demonic fury, a voidwalker is sometimes the last thing someone encounters before crossing over into death.

Old Gods are malignant entities that serve the void lords, and they live only to transform the worlds they infest into places of despair and death.[10]

Priests are devoted to the spiritual. Some priests pride themselves on pragmatism. They understand that light casts a shadow, that darkness is defined by light, and that true discipline stems from one’s ability to balance these opposing powers in services of a greater cause. While these priests possess many holy virtues to aid their allies, they also dabble in the dark arts to debilitate their enemies—always exercising immense discipline to keep themselves away from the brink of insanity. Many would say the ends justify the means; scriptures both virtuous and vile should be studied and understood to protect the congregation.[11]

The Light in which many priests bathe is brilliant and effervescent, granting them immense divine power. But the brightest light casts the darkest shadow—and from within this blackness, a rival power dwells. Shadow priests fully embrace this opposing polarity, their faith equally resolute as their holy counterparts—but focused on shadowy magics and mental manipulation. Like all priests, they dedicate much of their lives to worship—but they derive their power from the Void, straying dangerously close to the domain of the Old Gods. To truly understand such ancient, corruptive influence is to be driven mad. This is the state in which these dark priests thrive, embracing insanity and feeding off of the minds of their opponents to reach terrifying new limits.[11]

Bildros Nullvoid: "Fools are quick to dismiss what they don't understand as evil. I see what I do as a series of calculated risks in exchange for greater power and insight. Oh, with demons." 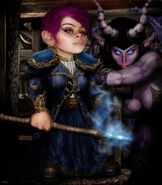 Kena Shadowbrand: Warlocks have the ability to convert their own life force into rewards - both material and evanescent.

Zenith Shadowforce: "I have drunk the life energies of my bitterest enemy, and they were sweet beyond the telling."

Warlocks are magical practitioners who seek to understand darker, fel-based magics, including destructive spells. Warlocks peer into the Void without hesitation, leveraging the chaos they glimpse within to devastating ends in battle—their greatest abilities are fueled by the souls they’ve harvested from their victims. They also exploit powerful shadow magic to manipulate and degrade the minds and bodies of their enemies.[12] 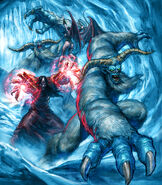 Fear: It fled without a word ... unless "AAAAAGH!" counts as a word. 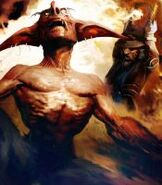 Death Coil: Death is not something you can run from when it comes for you.

Indulging in fel energies that wither away their life force over time, affliction warlocks are the masters of shadow magic.[13] They revel in corrupting minds and agonizing souls, leaving enemies in a state of torment that would see them undone in due time. Even the most battle-hardened warriors can be deceived, landing blow after blow against the warlock, only to succumb to their suffering as their very vitality is siphoned away by the dark spellcaster. To cause intense pain and suffering in others, these warlocks delight in using fel forces.[12]

"Beneath the shadow of the darkened spire, there is no light, no mercy, only void, and the chaos within." - Puzzle Box of Yogg-Saron, the Old God of Death[14]

Curse of the Fel: "Nothing important ever got done without a little bloodshed." - Myro Lumastis

Drain Life: "Only one of us is coming out of this alive." - Mias the Fair

Nightfall: "Shadow magic at work is a wonder to behold ... entrancing even." - Tessa Black

Void entropy can be defined as the void representation of the unavailability of a system's thermal energy for conversion into work, often interpreted as the degree of disorder or randomness in the system. Disorder is manifested as highly destructive fel magic, a brutal and extremely addictive energy fueled by drawing life from living beings.[15] Because fel magic is the manifestation of disorder, which can be defined as a lack of order,[16] one can consider fel magic to be a manifestation of a - or the - void, which can be defined as a lack. The void is chaotic since energies, naturally, want to spread out and become messy. Despite that fact, Matt Burns thinks there are exceptions to that rule when it comes to Warcraft powers since they are all magic.[17] It seems that Matt Burns doesn't understand that his thoughts cannot change the fact that the void is devoid of order (disorder), which is manifested as highly destructive fel magic.

Energies can be so chaotic that they manifest as entropic horrors, pure fel magic given form to lash out at all life—the essence they drop is poisonous[18] and would — or does — poison living beings with a sickness that drains life.

Darkflame: "Flames cast shadows, and so do I." - Tessa Black 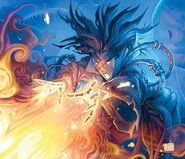 Fel Fire: No natural force can extinguish this fire.

Void horrors are horrors with an entropic nature that causes them to drift into the Twisting Nether.