Shadow priests in World of Warcraft

Shadow Priests are a specialization of the Priest class who have put the majority of their talents into the Shadow Tree. Priests interested in soloing and PvP usually select a heavy amount of Shadow talents, as Shadow spells dole out high DPS. These priests lack the healing power of priests specialized in the Holy and Discipline trees, but are formidable opponents in PvP.

Shadow Priests can also be invaluable support, whether by silencing casters, disarming melee, applying the Misery debuff to help allies hit, reducing an enemy's healing by use of Improved Mind Blast, shielding a party member, or dropping Shadowform to help with healing.

Prior to The Burning Crusade, Shadow priests were of limited use in group PVE, as they were generally inferior to primary DPS classes. Shadow priests now have little need to concern themselves with mana availability or crit rate, allowing them to focus almost solely on maximizing spell damage.

It is a common misconception that Shadow Priests are incapable of healing instances. As long as the Priest stays out of Shadowform and focuses on healing, he or she should be able to heal well enough to serve a group. An experienced Shadow Priest with high damage can even heal through trash pulls and non-raid bosses with Vampiric Embrace and Shadowform.

Shadow priests are extremely useful in endgame content, providing Replenishment for mana-intensive fights, and group healing for fights that include multiple people taking damage. Also, shadow priests with 3/3 Misery increase chance to hit the target with spells by 3%.

Threat is generally not a problem for shadow priests, due to a 30% reduction of threat generation in Shadowform, and the option to temporarily dump all threat with Fade. However, the healing from Vampiric Embrace, coupled with high damage caused can generate more threat per damage than most other classes. In addition, Mind Flay, a staple damage spell, causes additional threat due to its snare effect. Points into Shadow Affinity is used to reduce overall threat in a party/raid.

The Holy Light & How Undead Struggle To Use It - Warcraft Lore 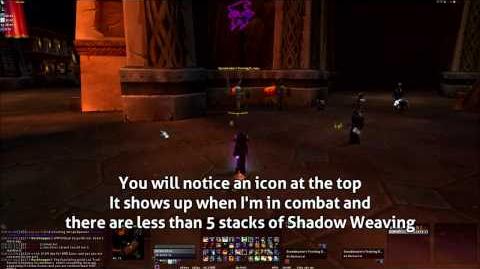 World of Warcraft How To Shadowpriest v2 (3.2.2)
Add a image to this gallery

HowToPriest.com The #1 Priest Website Online -- Howtopriest.com is a World of Warcraft discussion website for every spec of the Priest class. We have PvE guides, best-in-slot lists, UI guides, a media section that includes videos and live streams, gear help forum, and helpful, knowledgeable members.

Retrieved from "https://wowwiki-archive.fandom.com/wiki/Shadow_priest?oldid=2848191"
Community content is available under CC-BY-SA unless otherwise noted.