For information about playing the class in

Far seers
Shaman are stated to be spiritual guides and practitioners, not of the divine, but of the very elements. Unlike some other mystics, shaman commune with forces that are not strictly benevolent. The elements are chaotic, and left to their own devices, they rage against one another in unending primal fury. It is the call of the shaman to bring balance to this chaos. Shaman summon totems that focus the elements to support the shaman’s allies or punish those who threaten them, acting as moderators among earth, fire, water, and air.[1]

In the physical universe, the elements of fire, air, earth, and water serve as the basic building blocks of all matter. Shamanic cultures have long sought to live in harmony with, or assert dominion over, the elements. To do so, they call upon the primordial forces of Spirit and Decay. Those who seek to bring balance to the elements rely on Spirit (sometimes referred to as the "fifth element" by shaman, or "chi" by monks). This life-giving force interconnects and binds all things in existence as one. Decay is the tool of shaman seeking to subjugate and weaponize the elements themselves.[2]

Before life even began, before even the cosmos took shape, there was Light ... and Void. In the form of a boundless prismatic sea, the Light swelled across all existence. The ocean of Light was dynamic and ever shifting. Yet as it expanded, some of its energies faded and dimmed, leaving behind pockets of cold nothingness. From the absence of Light in these spaces, a new power coalesced and came to be. This power was the Void, a dark and vampiric force driven to devour all energy, to twist creation inward to feed upon itself. The Void quickly grew and spread its influence, moving against the waves of Light. The mounting tension between these two opposing yet inseparable energies eventually ignited a series of catastrophic explosions, rupturing the fabric of creation and birthing a new realm into existence. In that moment, the physical universe was born. The energies released by the clash of Light and Void raged across the nascent cosmos, raw matter merging and spinning into primordial worlds without number.[3]

The most common forms of life to appear were the elemental spirits—primordial beings of fire, water, earth, and air. These creatures were native to nearly every physical world. Occasionally, cloud of fractured Light gathered and gave shape to beings of far greater power, of far greater potential. Among them were the titans. Composed of the primordial matter from which the universe was born, the titans were godlike beings. Their spirits—known as world-souls—formed deep within the fiery core of a small number of worlds. These energies suffused the celestial bodies they have inhabited.[4]

There doesn't seem to be much information on the origins of the shamans on Azeroth, but it is known that members of a race known as yaungol studied with Cenarius, a wise demigod. They learned the druidic magic of the natural world, while others mastered the arts of wielding shamanic powers.[5]

On a world known as Draenor, a race known as orcs were a shamanistic beings who were led by the shamans of their tribes.

For millennia, since the primitive tribal cultures of Azeroth and Draenor, the natural elements of the physical universe have been celebrated, feared, and even worshipped. Mystics sought communion with the earth, air, fire, and water, and learned to tap into their raw power. In time, these spiritual guides came to understand that nature’s elemental forces aren’t wholly benevolent, but have, in fact, been locked in an unending conflict of chaos and primal fury that once consumed the physical realm. So began the calling of the Shaman, to bring balance to these volatile energies, leveraging their intensity to mend wounds . . . or inflict them.[6]

Certain shaman have dedicated themselves above all else to forging a deep bond with the elements. They have peered beyond the Elemental Plane, gleaning visions of an ancient past where manifestations of volatile energies once raged unimpeded across primordial Azeroth. Through careful study and dedication, the elemental shaman is able to channel such power into destructive magical surges. Through the body of the shaman flows bolts of lightning, as if from storm, and bursts of fire, as if from molten earth. They manipulate the land itself and summon spirits of earth, fire, and storm to their aid. To battle an elemental shaman is to taunt the very forces of nature.[6]

Intense communion with fire, earth, air, and water isn’t exclusive to the elemental shaman. In many ways, enhancement shaman similarly bond with nature and leverage its power on the battlefield. What distinguishes them in their training—and in their connection with the elements—is their combat methodology. These shaman favor empowering their physical attacks with elemental energies and facing their adversaries up close. They don’t shy from the frontlines, wielding magically augmented weapons, potent elemental attacks, and totems that shape the tide of battle.[6]

Some shaman find a serene affinity for the restorative properties of water. These shaman do not necessarily seek the Light or turn to the divine, yet they feel a profound spiritual connection with the source from which all mortal life took root. So strong is their connection with water that the shaman is able to restore life and heal afflictions. They balance this with a command of the other elements, finding harmony in nature and purifying their allies as a tidal surge washes across a sandy shore.[6]

Ancestral Spirit: "The ancestors have spoken. It is not yet time for you to join them."

Shamanism is a deeply spiritual form of elemental magic that involves a connection with both the natural and the spirit worlds. Shamans do not normally enslave elementals, but honor them, asking the elements to heed their call. Shamans are not inherently imbued with magic—they harness the powers of the elements through ceremonial totems.[7]

Demonic Soulstone: "You're done when I say you're done." - Victor Baltus 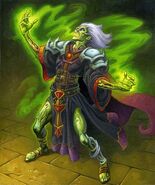 Life Tap: When the dark arts call for flesh, you can only trust your own.

Nether Inversion: "There is always a price to pay." - Grizlik Sparkhex

Conversely, warlockism is a deeply demonic form of magic that involves a connection with both the unnatural and the demon worlds. Warlocks do not normally honor demons, but enslave them, forcing the demons to heed their call. Warlocks, it seems, are not imbued with magic—they harness the powers of the demons and, by extension, the Twisting Nether through entropy and destruction. Despite that fact, after he was asked if perhaps warlocks are harnessing their power from the Twisting Nether, the Blizzard Historian Sean Copeland stated, “No, that’d be magi, IIRC. They gain power by the destruction of another source (recall the undead warlock in original cinematic)."[8] Additionally, he claims that demons contain fel magic but aren't the source, stating that the nature of this magic is created by destroying something else. It seems that Sean Copeland doesn't understand that fel magic is demonic and destructive—a force that destroys structures. If anything, demons are constructs in a state where they are being destroyed by their own energies, energies that are released from demons during that process. After he was how demons can be alive since fel magic is destructive, Sean Copeland stated, "it's magic ;)". As such, Sean Copeland can't be taken seriously and warlocks are necromancers.

A Flaw with the Shaman's Claim?

"Everything that is, is alive." - The shaman Nobundo[9]

Necromancy is the study and use of magic to raise and control the dead..[10] Feasel wouldn't say a construct is dead because it was never alive really. Despite that fact, the shamans said that all things had a life, a power, a spirit. They were deeply involved with the spirits of the elements—earth, air, fire, and water—and the Spirit of the Wild—and claimed they could sense the life force in earth and even seemingly dead stone.[11] With no exceptions to the rule, they would even claim that infernals, fel constructs composed of fel fire and stone, have life force. As such, it seems that raising and controlling infernals is basically shamanism and therefore necromancy. Jeremy Feasel, it seems, wouldn't state that controlling infernals is shamanism because they're fel constructs as opposite to living earth creature enslaved against their will.[12] It seems that Jeremy Feasel doesn't understand that elementals can be constructed (e.g. fire elementals)[13]