This article is about the character biography of Sindragosa. For information on how to defeat Sindragosa in Icecrown Citadel, see Sindragosa (tactics).

Sindragosa, formerly the wife and prime-consort of Malygos and Queen of the Blue Dragonflight, is a mighty frost wyrm who was raised by the Lich King himself at Sindragosa's Fall in Icecrown.[2] She is the very same frost wyrm that the Lich King raised in the Wrath of the Lich King cinematic, as the same scene is played out after completing the quest Where Dragons Fell.

From the book set "Cinematic Art of Wrath of the Lich King" from Blizzcon '08 Long before the Great Sundering, the five dragonflights — red, blue, bronze, green, and black — were charged with watching over the budding world of Azeroth. Sindragosa was the Queen of the Blue Dragonflight and beloved consort of the blue dragon Malygos, also called the Spell Weaver, guardian of all arcane magic. With the help of goblin servants, Neltharion created a powerful artifact called the Dragon Soul. He convinced his dragon brethren to empower the disk, claiming it would thwart the impending invasion of the demonic Burning Legion.

However, Neltharion betrayed his dragon allies during the Legion's assault and after being corrupted by the Old God N'Zoth, provoking an apocalyptic battle in the skies over the Well of Eternity. Malygos and Sindragosa joined the blue dragons in surrounding the Earth Warder. They charged the black dragon, but Neltharion used the might of the Dragon Soul to strike out, decimating nearly all of the blue dragonflight. The blast hurled Sindragosa far across the land, deep into the frozen north.

Blinded and near death, Sindragosa after being wounded by Deathwing sought desperately to reach the Dragonblight — the place where dragons instinctively travel to die. No longer able to fly, Sindragosa plummeted to the cold earth in the region of Icecrown. The blue dragon gathered what remained of her energy and called out to Malygos for aid. Her only answer was the howling arctic wind as she struggled on, but the distance was far too great; agonizingly she realized that her spirit would not find rest within the Dragonblight. Her life continued to fade away as her sanity deteriorated.

And in her dying moments... Sindragosa vowed revenge.

Sindragosa is briefly seen in the Pit of Saron, the second 5-man Icecrown instance, after the defeat of Scourgelord Tyrannus. While the leader of the army of liberated slaves (Martin Victus for Alliance, Gorkun Ironskull for Horde) commends the players for their bravery and their efforts to free them, Sindragosa flies up from the pit below and unleashes her fury, killing the leader and his army. The players are pulled back to the entrance tunnel by Jaina Proudmoore or Sylvanas Windrunner, saving them from a grisly death.

She is slain in the innermost sanctus of Icecrown Citadel by adventurers led by Tirion Fordring and Darion Mograine who sought the death of Arthas Menethil, the Lich King.

Sindragosa appears as a boss encounter in the Frostwing Halls inside Icecrown Citadel. She was one of the first two bosses to be announced, the other of course being the Lich King himself.[3]

In World of Warcraft: Legion

Sindragosa appears to be still bound to Frostmourne, as she can periodically be summoned using the Blades of the Fallen Prince. That places her under the command of the Deathlord of the Knights of the Ebon Blade.

She is summoned as one of Arthas's ultimate abilities, dealing damage with her frost breath in a line in front of her.

Sindragosa from the Wrath of the Lich King opening cinematic. 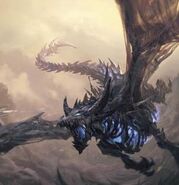 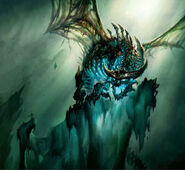 Sindragosa in Heroes of the Storm

See this subject on the Hearthstone wiki: Sindragosa